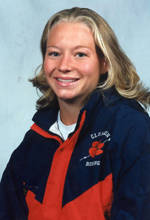 Tiger rower Kate Niebauer was named a 2003 National Strength and Conditioning Association All-American. A senior from Naples, FL., Niebauer is a member of the Varsity 8+ crew this season. She was a member of the South Region Champion Second Varsity 8+ for the 2000-2001 and 2001-2002 seasons. Niebauer received the Athletic Directors Academic Excellence Award in addition to being named to the ACC Academic Honor Roll for the 1999-2002 seasons. She is also a member of the Eta Sigma Gamma Health Science Honors Fraternity.

Niebauer was nominated by Clemson’s strength and conditioning coach Tanna Burge who wrote in her nomination that, “Kate has impressed me since the first day I worked with her. Her intense work ethic and powerful will to succeed has helped her become one of the strongest leaders on the team.”

The National Strength and Conditioning Association (NSCA) recently recognized 151 student athletes with the All-American Strength and Conditioning Athlete of the Year Award-recognizing the dedication of student athletes, both in and out of the weight room. Strength coaches from 73 colleges and universities nominated athletes from 19 competitive sport categories. Each coach selected his or her top male and female athlete for this award based on their dedication to strength training and conditioning, athletic accomplishments, academic and personal achievements, community involvement, and leadership qualities.

The NSCA All-American Athlete of the Year Award program is in its 20th year, and is made possible by a grant from Power Systems, Inc., a Knoxville, Tennessee fitness product leader. For a complete list of All-American Strength and Conditioning Athletes, contact the NSCA at 800-815-6826, or nsca@nsca-lift.org.