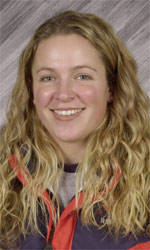 GREENSBORO, NC – Clemson rower Lauren Henne is one of 19 Atlantic Coast Conference scholar athletes who were named recipients of the 2001 Weaver-James-Corrigan Postgraduate Scholarships, as announced by Commissioner John Swofford. The scholarships are awarded to selected senior student-athletes who have intentions of continuing academic work as full-time graduate students. Each recipient will receive $5,000 to use toward his or her graduate education. These student-athletes have performed with distinction in the classroom and in their respective sports, and have demonstrated exemplary conduct in the community.

Henne, a native of Hilton Head, SC, was an All-ACC selection and a member of the ACC Academic Honor Roll in both 1999 and 2000. She was a team captain in 2000 and a co-captain in 1999. Henne earned the team’s Most Valuable Athlete Award and was also the co-winner of the team’s Most Inspirational Varsity Athlete award.

The 2001 Clemson rowing team opens its season at home on March 10 with a dual regatta with Villanova.