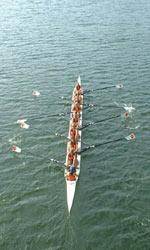 CLEMSON, SC – The Clemson rowing team is ranked 24th according to the 2002 USRowing/CRCA NCAA Division I Varsity Eight Coaches Poll released yesterday. This is the fourth consecutive week that Clemson has been ranked 24th. The University of Washington tallied 19 first-place votes to claim the top spot while Brown University ranks second and the University of Michigan is third.

Clemson is one of three ACC teams ranked in this week’s poll. The University of Virginia is ranked 11th, while Duke is 19th. The complete poll is listed below.