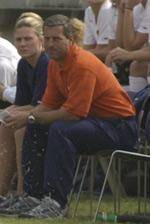 The Lady Tigers will play Georgia at Knoxville, TN on Friday, November 14. The time of the match will be announced later.

Clemson is led in scoring by freshman Courtney Foster with 13 goals and five assists for 31 points. Allison Graham has five goals and 10 assists for 20 points. Goalkeeper Lauren Whitt has a 0.85 goals allowed average.

Head Coach Todd Bramble is in his third year at Clemson and has a 2-2 record in NCAA play.