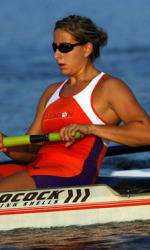 The Cavaliers won the team title with a total of 59 points, followed by Clemson with 51. Duke finished third with 33 points, followed by the Tar Heels from North Carolina in fourth with 28 points. Miami finished fifth with 24 points, and Boston College rounded out the field with 12 points.

Suzanne Van Fleet was named All-ACC for the second consecutive year. Joining her on the All-Conference team were Liz Robb and Jessica Leidecker. The three Clemson rowers named to the All-ACC team tied the school record for most Tiger rowers honored in a single season. In addition to being named to the All-ACC team, Robb was also named the ACC’s Freshman of the Year. This is the first time a Clemson rower has received this honor.

In the Novice 8+ race, Clemson finished first with an ACC record-setting time of 6:46.3. Virginia finished just behind Clemson with a time of 6:47.9, followed by North Carolina (7:06.0) and Miami (7:31.1). The Tiger’s victory marked only the third time Virginia has been defeated in an individual event in the history of the league championship. Clemson’s Varsity 4+ took first place in 2001, and Clemson’s Novice 8+ crew also won in 2005.

“I am happy and excited about our novice program having won the Novice Eight. I look forward to their future at Clemson,” said Head Coach Richard Ruggieri. “I look forward to learning from this experience today at the ACC’s as we prepare for regionals.”

The Tigers will return to action on May 17-18 at the Central/South Regionals held in Oak Ridge, Tennessee.