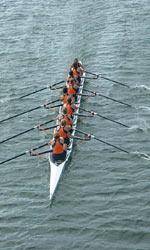 Clemson rowing competed against the University of Iowa and Kansas State today in the Kansas State Triangular in Manhattan, KS. The regatta was delayed for two hours due to extremely low temperatures. In addition, as a result of high winds the race course was moved to a cove where the teams competed on a partially buoyed course.

The Varsity 4+ was to compete in the first race of the day, but the Tigers’ boat was bumped by Kansas State causing a fin and rudder to break. The repairing of the boat delayed this race until the end of the regatta. Iowa took first in the racing, while the injured Clemson boat finished second in 7:55.4. Kansas took third.

In Clemson’s only first place finish in Kansas, the Tigers’ took first in the Novice 8+ in 7:36.6. Iowa followed in 7:39.5, with Kansas State finishing 10 seconds behind Iowa.

The placing for the Second Varsity 8+ and Varsity 8+ were the same with Iowa taking first, Clemson following in second, and Kansas State finishing up in third. The Tigers’ pulled out even with Iowa in the Varsity 8+ event and held that position, when the boat were at 200 meters Iowa pulled ahead, but the Tigers kept an even pace behind them finishing just six after the Hawkeyes.

“In very challenging and adverse conditions, the Tigers’ handle the choppy water well,” said head coach Susie Lueck of the Kansas State Triangular. “They rowed with confidence and composure. We are blessed with great athletes, teamwork, and a commitment to excellence.”

The Tigers’ Second Novice 8+, Second Varsity 4+, and Third Varsity 8+ remained in Clemson this weekend to compete in the Clemson Sprints hosted by the Clemson Rowing Association (CRA).

The Second Novice 8+ won the final of the Women’s Novice 8+ in 7:33.1. Following Clemson in were Georgia “A”. Georgia Tech, Georgia “B”, College of Charleston, and Rice respectively.

The final of the Varsity Women’s Open Four race finish so closely that Clemson’s Second Varsity 4+ exited the water not knowing they had won. The Tigers’ who won with a time of 7:41.0 defeated Georgia by only a few tenths of a second. Georgia State finished next followed by CRA, Wake Forest, Wheaton, Emory, and Georgia Tech.

Clemson’s Third Varsity 8+ finished fourth in their heat competing in the Varsity Women’s Open four. They had a 12th place finish out of 25 boats after all the heats were completed.

The Tigers will return to action next weekend when the compete in the San Diego Crew Classic .

Clemson Versus Iowa and Kansas State