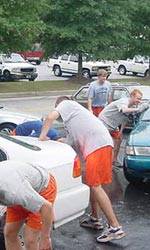 Clemson, SC – Simply by washing cars for three and half hours on Wednesday afternoon, the Clemson Men’s Soccer raised close to $3,500 dollars to be put towards the Red Cross Disaster Relief Effort that is taking place due to the terrorist tragedies that occurred early last week.

The car wash, which took place in the parking lot of Papa John’s Pizza on College Avenue, started at 3:00 in the afternoon and the number of people that gave money to the cause were too numerous to even count. The car wash was free of charge and all of the money was raised through donations from people in the Clemson community.

As Clemson Head Coach Trevor Adair watched the terrible events of last week unfold on television, he immediately began thinking of ways his team could help aid in the relief effort. “When a tragic event like that happens you have such a helpless feeling,” said Adair. “You want to help but you are so far away that it is difficult to know what to do. Because we did not have any games this week, I thought it would be good to get our team involved with the community and help in some way. It ended up being a very rewarding experience for our players because they were able to contribute to the disaster relief effort and help those people who are need.”

“I have never seen anything quite like it,” Assistant Coach Andy McMahon said. “The people and the town of Clemson are simply amazing.” “People were driving by holding ten and $20 bills out of their car windows, and one lady was even crying as she handed us a $100 check.”

While the attacks of last week have not slowed the spirit of the Clemson soccer team, they have forced the rescheduling of two of their games. The Tigers home game against Duke that had been originally scheduled for September 14 will now be played at Historic Riggs Field on Wednesday, November 7 at 7:00 and their game against Wake Forest on November 7 has been rescheduled for Saturday, November 10 at 7:00. e