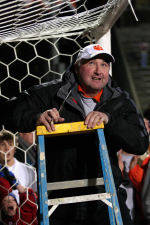 Clemson is ranked tied for third in the final NSCAA Poll

This is the highest that the Tigers have finished in this poll since the 1979 season as that team was ranked third as well. Clemson has been ranked in the final NSCAA poll a total of 23 times since the 1972 season.

Clemson Head Coach Trevor Adair has coached seven teams to top 25 finishes in his 11 years as the Tigers’ head mentor.

The Tigers finished the 2005 season with a 15-6-3 record overall and advanced to the NCAA’s College Cup Final Four in Cary, NC.

Dane Richards led the Tigers in scoring in 2005 with 12 goals and eight assists for 32 points.