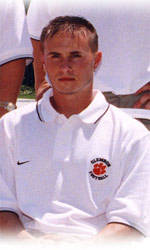 Brett Ringer, a five year student videographer for the Clemson Athletic Department, was killed Thursday afternoon at a fireworks plant where he was employed for the summer. Ringer, who was 24, was to return to Clemson this fall as a Graduate Assistant in the Video Department.

During his years at Clemson he was by far the hardest working student, earning his way up from an unpaid job his freshman year to becoming the end zone videographer for Clemson Football’s coaches’ video. His work ethic allowed him to master the department’s video editing system to the point that he worked every Sunday helping to edit the incoming video exchange tape. His love of video kept him in the Clemson Video office late at night, to the point that he was told to leave on many occasions to ensure he received enough rest during the season.

“Brett’s work ethic is what every Video Coordinator is looking for in a student” said Rick Bagby, Clemson’s Director of Video Services. “In my three years of working with Brett, I never had to tell him anything twice. He always knew what needed to be done and he was such a self starter I never had to ask him to do anything – he just went and did it.” Ringer was a quiet person who wanted his actions to speak for him. “He was certainly the leader of my student group. He will be missed greatly.”

Brett Ringer will be laid to rest Sunday, July 22nd in Hendersonville, SC.