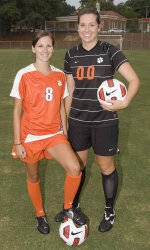 There are only two seniors on the 2010 Clemson women’s soccer roster. Forward Samantha Fortier and goalkeeper Marci Elpers make up what is considered to be a small senior class on a soccer squad with 23 players on the roster. While their class may be small in numbers, the impact that the two players have had on the program has been significant. And the plans that each student-athlete has for her future beyond Clemson are certainly not small either.

For Fortier, it took just one visit to Tigertown to make her decision on where to go to college. After visiting several other schools (Massachusetts, Ohio State, Princeton, Villanova), the Wilbraham, MA native had not yet found a school that was the right fit for her.

“When I visited Clemson, I knew it was the perfect fit for me,” said Fortier. “I loved everything about Clemson – the girls on the team, the atmosphere, and the pride people had for being a Clemson Tiger. It was the perfect college town and I committed two days after my visit.”

Elpers initially chose Clemson for its engineering program. In fact, after growing up playing soccer in Kingsport, TN, Elpers planned to continue her soccer career on Clemson’s club team. She played on the club team for less than one full season when she received the call, asking her to play with the varsity team.

“That was one of my most memorable moments,” Elpers recalled. “I can still remember where I was when I got that phone call and the feeling that I had. It was a great opportunity and I could not imagine my time at Clemson any other way.”

Fortier is a veteran of 51 games as a Tiger and has five goals and seven assists in her career. During her freshman season in 2007, she finished in a tie for third on the team in scoring with 13 points. That year, the Tigers advanced to the second round of the NCAA Tournament. Fortier suffered an ACL injury during the 2010 spring season and is still working to get back to full strength. She hopes to be back on the field competing sometime in October.

Elpers’ sophomore year (2008) was her first full season on the team, as she joined the Tigers just prior to postseason play in 2007. Elpers has played a role as a backup goalkeeper for three seasons, seeing action in six games and recording 21 saves in her career.

Fortier and Elpers will both leave Clemson with fond memories. They cited the atmosphere at Riggs Field on gameday, competing in the 2007 NCAA Tournament, lining up across the field from a nationally-ranked opponent, and the feeling after a hard workout with the team as a few of their favorites. Both seniors agree that the thing they will miss the most about Clemson will be their teammates.

“Over the past four years, my teammates have become my best friends and I will always be close with them for the rest of my life,” explained Fortier. “The soccer team is my family at Clemson and I will miss being around them. The fun soccer trips, celebrating our wins, through good times and bad – we have all been there for each other.”

“I’ll definitely miss my teammates first and foremost,” admitted Elpers. “I love being a part of this team. The girls on the team make the entire experience worthwhile. Our team is so close this year…it makes practice and playing together mean that much more.”

Although they will forever remain friends with their current and former teammates, Fortier and Elpers may or may not be geographically close to them over the next few years, as both have big plans for the future.

Fortier recently completed an internship at a bipartisan lobbyist firm on Capitol Hill in Washington, D.C. She spent the summer working in the firm’s telecommunications area, researching bills and attending hearings of the Senate and House of Representatives. Fortier will graduate with a degree in political science in May of 2011 and plans to attend law school beginning in the fall of 2011.

Following her graduation in May of 2011 with a degree in bioengineering, Elpers plans to attend medical school. Although she is still involved in the application process, Boston University is one of her top choices. After spending the summer shadowing an orthopedic surgeon in clinic and in surgery, Elpers has developed an interest in orthopedic surgery. She also enjoys working with children and sees pediatrics as another potential area of focus for her medical career.

Attending Clemson and being a part of the soccer squad have helped Samantha Fortier and Marci Elpers shape these impressive plans for the future. Over the past four years, the two seniors have certainly left their mark on Clemson as well. Both will be moving on soon to make an impact in the next phase of their lives, as a lawyer and a doctor, respectively, with Clemson remaining in their hearts.