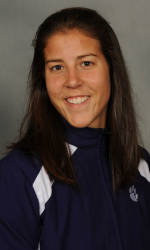 Rower Michelle Nance is unlike most athletes at Clemson in that she had no previous experience in her sport prior to her arrival in Tigertown. But in just three years, Nance has gone from being a walk-on to a competitor in the world rowing championships.

“The whole experience has been a whirlwind,” said Nance. “I knew absolutely nothing about the sport when I got here. I didn’t even know which side was port and which side was starboard, and then I started learning all of this technical stuff. There is so much to rowing that you don’t even realize.”

Nance ran cross country and played soccer at Mauldin (SC) High School. She had opportunities to continue her soccer career at some smaller colleges, but her heart was set on going to a bigger school like Clemson. During her first few days on campus, she met someone who encouraged her to walk-on to the rowing team.

“At first, I wasn’t really sure about it, but I went through the tryout process and fell in love with the sport,” remembered Nance.

Nance spent her first year on the novice team, but she earned a spot in the top boat from the start of her varsity career as a sophomore. She has rowed with the Varsity 8+ in all but one race since she has been on the varsity team. She was a member of the Varsity 8+ crew that reached the 2008 NCAA Rowing Championships for the first time in school history, and she returned to the prestigious regatta again in 2009.

Nance’s most memorable accomplishment as a Tiger was as a member of the first ACC Championship team in school history last season. Nance’s crew defeated Virginia for the first time in the history of the league regatta en route to being honored as the ACC Crew-of-the-Year. She also took home All-ACC honors for the first time in her career. Nance credits her teammates along with their dedication and hard work in making her experience special.

“The feeling of all of us coming together and keeping at it was awesome,” said Nance. “For the first time, we really believed that we could win. It wasn’t so much the final outcome, but the journey.”

However, Nance’s rowing accomplishments have extended beyond her career at Clemson. She is a two-time participant in the Under-23 World Championships. In the summer of 2008, she and three Clemson teammates along with Head Coach Richard Ruggieri traveled to Brandenburg, Germany to represent the United States, as they finished fourth in the world.

She made the world championship team again this past summer, but this year she gave sculling a try for the first time. Always up for challenges, Nance was used to sweep, or using just only one oar while rowing, while sculling involves using two oars at one time.

“On the first day of camp, I had never sculled before and I caught about five crabs and failed miserably,” admitted Nance. “The thing about this summer for me was knowing that through my failures, I was getting better and learning a lot.”

Nance persevered throughout a long summer of training to finish ninth at the world championships in Racice, Czech Republic.

Not only has Nance succeeded on the water, she has excelled in the classroom and the community. She was selected as the Scholar Athlete-of-the-Year by the ACC last season. Nance has earned a variety of academic awards throughout her career, including twice being named a National Scholar Athlete by the Collegiate Rowing Coaches Association, and she is a two-time member of the ACC All-Academic team.

Nance received the Blue Key Academic & Leadership Award last year, which is given to one student in each of the five academic colleges who has distinguished themselves in terms of academic scholarship and campus leadership.

As though getting up before sunrise for rowing practice every day and maintaining a high grade point average are not enough to keep her busy, Nance is also very involved on campus. She currently serves as the president of the Solid Orange Squad, an elite group of over 100 student-athletes who fills all requests for service received by the athletic department.

“It has been a great experience so far this year. Not only does it involve going to the events, but I’m responsible for finding people to go, coordinating where we go, when we go, and what we are doing.”

Nance is also the captain of the rowing squad’s Relay for Life team. She recently helped organize an ultimate frisbee competition to raise money with her teammates. In addition, she serves as the vice president of the Language & International Trade Society.

“I’m the kind of person who has to stay busy,” said Nance. “I’m doing a lot right now…I can’t even keep it all straight!”

Nance is majoring in language & international trade with an emphasis in Spanish, although she has also taken German classes for fun.

“We like to say I’m two-and-a-half lingual,” smiled Nance.

She will have an opportunity to perfect her Spanish skills when she studies abroad in Alicante, Spain next fall. Her major requires a study-abroad experience prior to graduation, so Nance is looking forward to the opportunity before she graduates in December.

For now, Nance is focused on building upon recent successes during the spring rowing season, which begins March 6 on Lake Hartwell.