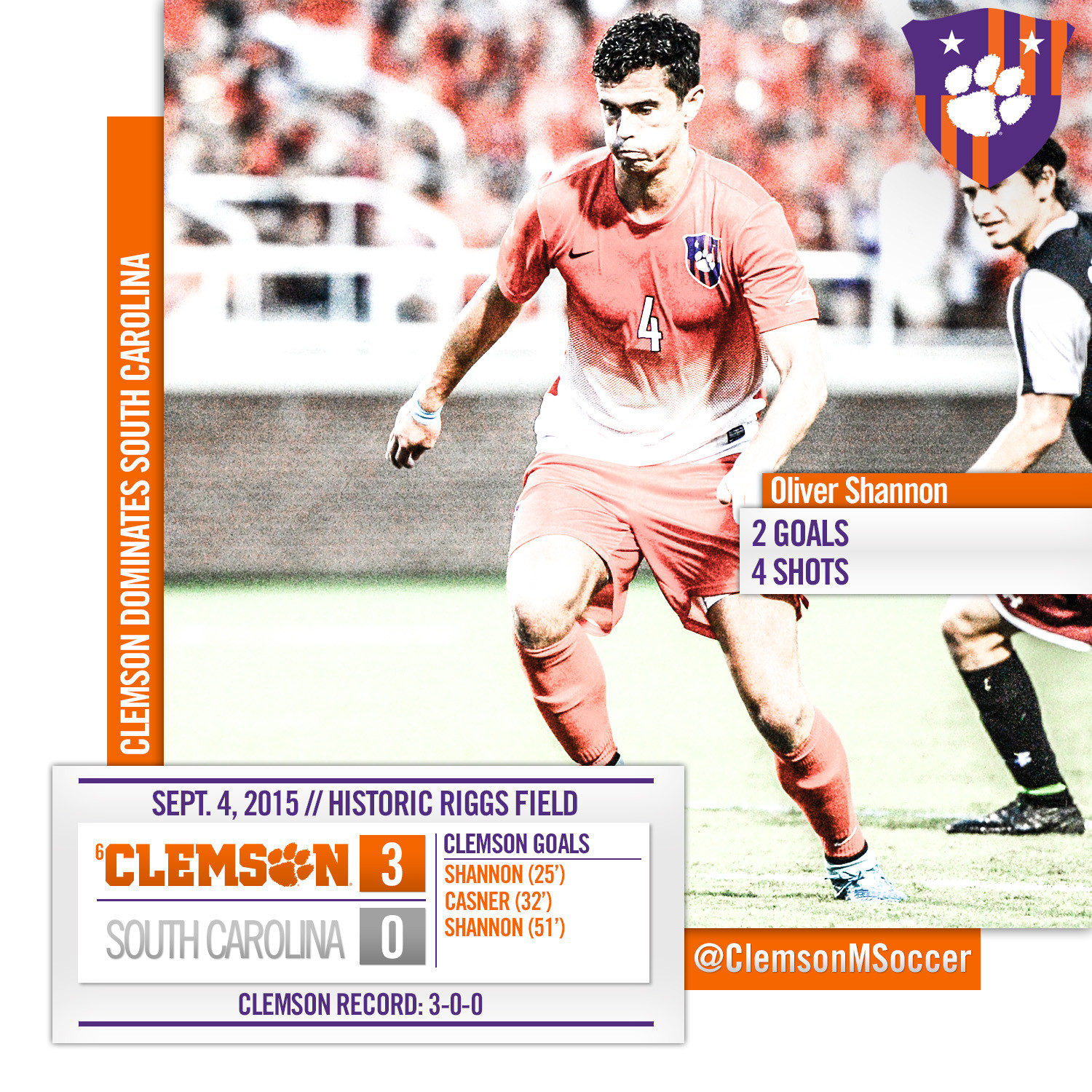 CLEMSON, S.C. – In front of 7,868 fans, the second-largest crowd in the history of Historic Riggs Field, the sixth-ranked Clemson men’s soccer team defeated South Carolina by a score of 3-0 on Friday night. Sophomore midfielder Oliver Shannon produced two of the Tigers’ three goals on the night, helping the team improve to 3-0 on the young season. The loss was the first of the year for the Gamecocks, who fell to 2-1.

“It was an entertaining performance and I am very proud of the team,” head coach Mike Noonan said. “All credit to the players and the way they prepared and the experience of the team.”

The crowd was fantastic and we fed off them, but I want to see the biggest crowd in 100 years when we celebrate 100 years (Oct. 2 vs. Virginia Tech),” said Noonan. “I think this was a good start.”

The Tigers went on the offensive from the first whistle, and threatened with five shots in the first 25 minutes of play, including two that hit the post, one by senior captain Kyle Fisher and one by sophomore Diego Campos. Shannon ultimately put Clemson on the board first in the 26th minute. Juniors Austen Burnikel and Iman Mafi crossed the ball to Shannon from the left side, and the sophomore midfielder sent a low shot into the back of the net for his second goal of the season.

TJ Casner gave Clemson a 2-0 lead in the first half with an unassisted goal at the 32:10 mark. Casner’s diagonal shot from 16 yards hit the inside of the left post and bounced into the net. It was the first goal of the season for the senior forward.

Shannon’s second goal in the 51st minute, a deflected strike that went in the net unassisted, virtually wrapped things up for Clemson. The Liverpool, U.K. native now has three goals this season, and the two scored tonight were scored in front of his dad, who was in town from the United Kingdom.

As a team, Clemson out-shot South Carolina 19-12. The Tigers held a 11-2 advantage in corner kick opportunities as well. Junior goalkeeper Andrew Tarbell made four saves in his first clean sheet of the season.

The win over South Carolina gave Clemson a 2-1 lead over the Gamecocks in the Certified SC Grown Palmetto series, which calculates points won by the two schools in head-to-head match-ups across all varsity sports. The Tiger women’s soccer team defeated the Gamecocks on Aug. 28, but South Carolina gained a point with a victory in volleyball earlier today.

“I think South Carolina found out that Clemson’s got a pretty good team,” Noonan added.

Clemson faces its first top-25 ranked opponent on Monday, Sept. 7 when it hosts No. 11 Coastal Carolina. The game between the Tigers and Chanticleers kicks off at 7 p.m. at Historic Riggs Field.