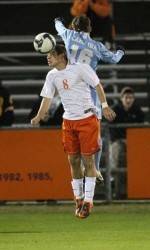 CLEMSON, SC – Riley Sumpter scored with 14:56 left to go in regulation to lead Clemson to a 1-0 win over St. Louis in a men’s intercollegiate soccer match at Clemson, SC Friday night.

Sumpter scored his goal in the 76th minute. Nick Burton sent a corner kick from the right side in the box. Sumpter headed the ball down and the ball bounced to the back of the net for his third goal of the season.

With 39:32 left to go in the first half, Nick Burton headed the ball from six yards out on a diagonal shot but the St. Louis goalkeeper Nick Shackelford was there to make the save to keep the match scoreless.

With 31:14 left to go before the half, St. Louis’ Jon Roeckle sent a 25-yard shot toward Clemson’s goal. The Tiger’s goalkeeper, Cody Mizell made a diving save to his left as the match remained 0-0.

Another attempt by the Tigers came midway in the first half as Alex Stockinger took a corner kick by Jack Metcalf and sent the ball from six yards out towards the goal. However Shackelford made the save and the half remained scoreless.

At the beginning of the second half, Sumpter attempted a header from 10 yards awa, but the ball was saved again by Shackelford. After Sumpter scored the Clemson goal, there were two serious attempts made the Billikens.

With only 5:56 left in the match, Alex Sweetin tried a turnaround shot from eight yards out but Mizell made the save to preserve Clemson’s 1-0 lead.

With only :58 seconds remaining in the match, Michael Robson crossed the ball from the right to Christian Briggs. Briggs sent a six-yard head shot toward the goal but Mizell was there to make the save.

“It felt really good to get the game winner,” said Riley Sumpter. “We have been having a lot of one goal games and finally to get on the other end of it is a great feeling.”

Clemson will play host to Gardner-Webb on Tuesday night at 7:00 p.m. in the Tigers’ next action.