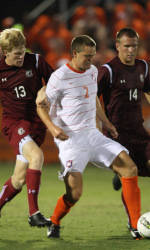 CLEMSON, SC – Ben Myers and Amadou Dia both scored goals in leading Clemson to a 2-0 victory over South Carolina in a men’s intercollegiate soccer match at Clemson, SC Friday night.

The Tigers are 1-1 on the year, while South Carolina falls to 0-2 this season. In the last 16 meetings between the two schools, Clemson is now 11-4-1 in the series.

A crowd of 7,423 was on hand at Historic Riggs Field. This set a new regular-season attendance record at the facility.

“The freshmen stepped up, and I thing we withstood a lot of pressure,” said Clemson goalkeeper Cody Mizell. “It was a great win for us, and I’m thankful for the result.”

Clemson scored first at the 15:18 mark. The Tigers’ Ben Myers dribbled at the top of the box, with his back to the goal. He shifted to his right then turned and fired a low 22-yard shot that just went in the goal near the right post to give the Tigers an 1-0 advantage.

South Carolina threatened with over 10 minutes left to go in the game. The Gamecocks’ Braeden Troyer fired a 12-yard shot that was saved by Clemson’s goalkeeper Riley Sumpter cleared the ball preserving Clemson’s 1-0 lead.

“I give a lot of credit to South Carolina,” said Clemson Head Coach Mike Noonan. “They made us play uncomfortably during the game. I thought we had low energy and sometimes played complacent. This team showed character, and they do not like to lose. I’m happy to get the win. “Cody Mizell is a big-game performer. I’m glad he’s on our side. We will enjoy the win, and get back to work. We have a bright future as two freshmen were the goal scorers for us tonight. We can play better than we showed tonight. We are young, and I’m glad to get the win. It was a great crowd tonight, and a wonderful atmosphere.”

The Gamecocks were again pushing the ball late. Clemson’s Nick Burton gained control of the ball and sent a long pass to Amadou Dia. Dia ran underneath the ball and went down the field creating a one-on-one situation with South Carolina’s goalkeeper Alex Long. Dia sent a diagonal shot into the goal from 18 yards out beating Long on his left giving the Tigers a 2-0 lead.

Clemson will play host to UNC Greensboro on Monday night at 7:00 p.m. at Historic Riggs Field in the Tigers’ next action.