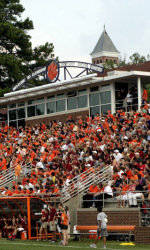 The Clemson head coach has not shaved since the start of preseason camp, a tradition he employs until his Tigers garner their first victory of the season. Thanks to goals from Ben Meyers and Amadou Dia, and four saves from goalkeeper Cody Mizell, Clemson beat archrival South Carolina 2-0 Friday night in front of a record breaking crowd at Historic Riggs Field.

“I’m going to come over to the Clemson House, and the boys are going to take it off,” Noonan said smiling.

“We didn’t do very well against them last year, and I’m talking about (every sport at) Clemson,” said Noonan, who is in his second season with the men’s program. “This is a start to a great year. Hopefully, the other teams will be able to match it and use this as momentum to be able to get on top of the Gamecocks.

Noonan was especially happy with the play of his defense and Mizell in goal. South Carolina (0-2) fired 14 shots at the Clemson net, with Mizell recording four saves on goal. After Meyer’s goal at the 15:18 mark of the first half, the Gamecocks had five solid looks at the Clemson goal and all five times the Tigers were able to hold them off.

“(Mizell) made two or three very, very big saves, there is no question about it,” Noonan said. “But, he made a couple of errors too that created pressure for himself. Cody will learn from that, but I will tell you what, I don’t want anybody else back there. He is a big-game performer that is a very mature young man and a good leader.

“We are happy he is anchoring our defense.”

Mizell was happy to see defender Riley Sumpter clear a shot off line that preserved the Tigers’ 1-0 lead with 6:23 to play. USC’s Braeden Troyer first fired a shot towards Mizell, who deflected the shot away with his leg. However, midfielder Emmett Lunceford found the ball and powered another one towards the Clemson keeper, which Mizell batted away with his hand.

The ball then rolled along the line, and that’s win Sumpter swooped in and cleared the shot, ending the Gamecocks last chance to tie the match. “Our coaches really harp on communication in the back so every day we work on our communication and part of the deal is that we have each other’s back,” the senior said. “If someone makes a mistake, we have to cover and that is what happened tonight.”

With the defense consistently shutting the door, Dia and the offense finally took advantage of it when the freshmen took a pass from senior Nick Burton and raced up field where he put the breakaway goal just past the outstretched arms of USC goalkeeper Alex Long and into the right corner of the net.

“My heart was beating really, really fast so I just took a deep breath, calmed myself down and shot it,” Dia said.

It was a shot that lifted the Tigers to one of their biggest victories in a long time.

“(This win) gives us motivation, and gives us hope for the future,” Meyer said. “If we keep working hard and bringing it hard in practice, we are going to keep getting better.”