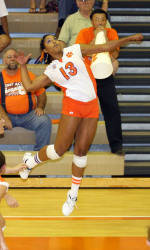 CLEMSON, SC – Lia Proctor posted a career high in kills and Clemson hit a higher percentage than the Yellow Jackets, but the Tiger comeback fell just short and Georgia Tech claimed the 3-2 (25-22, 25-20, 22-25, 17-25, 15-13) victory. Clemson rallied from a 2-0 deficit in the match to force the fifth set, but the Yellow Jackets won four of the first five points and held off the Tigers the rest of the way.

Clemson fell to 6-4 overall and 0-1 in conference play, while Georgia Tech improved to 7-2 on the year and 1-0 against ACC action.

Proctor carried the Tiger offense with a personal-best 23 kills, while hitting a team-high .375 clip. The native of Inman, SC recorded her second double-double of the season with 11 defensive saves in the contest as well. Fellow outside Jeannette Abbott also tallied double figures in kills and digs with 10 and 13, respectively.

Although Clemson posted a higher hitting percentage for the match at .297, the Yellow Jackets recorded nearly 20 more kills overall to help put them on top. Seniors Talisa Kellogg and Callie Miller combined for 48 of Georgia Tech’s 77 kills, while setter Mary Ashley Tippins recorded 17 digs to go along with 65 assists.

The Yellow Jackets went to Kellogg from the start of the match as she scored the first point of the night. Georgia Tech opened up a six-point lead before the Tigers were able to catch up at 15-15. After another tie at 17 apiece, the Yellow Jackets recorded back-to-back kills and held on for the 25-22 first-set win.

Set two was close until the 15-point mark, as the teams traded points and runs. However, Georgia Tech then ran off six straight points and Miller and Kellogg were responsible for four of the Jackets’ final five points of the set. Clemson setter Kelsey Murphy led the offense to a .393 hitting figure for the frame, but the defense recorded just one block as Georgia Tech hit a .500 percentage.

The Tigers then limited the Yellow Jacket runs in the third set and the teams were knotted 14 times. Tied at 21-21, Proctor posted a kill to return the service to Clemson and rookie Lacy Hayes blocked a Kellogg shot to give the Tigers a two-point advantage. Kellogg responded with a kill on the next play, but Proctor and Danielle Hepburn sealed the 25-22 win to extend the match.

Clemson was then in control from to start to finish of set four. Proctor scored the Tigers’ first two points on kills and then served points three through 10 to set the tone of the frame. They survived an early Tech rally that cut the margin to 10-8 but dominated the rest of the way for the 25-17 win.

Kellogg struck first again in the fifth set, her first of five kills in the shortened deciding set, and the Yellow Jackets led throughout. Clemson came within one point several times, but Georgia Tech offense stayed on top for the 15-13 win.

The Tigers will face Florida A&M on both Saturday and Sunday as part of the 2008 Clemson Classic. Saturday’s match is slated for 11:00 am, while the team will face off at 1:00 pm on Sunday.