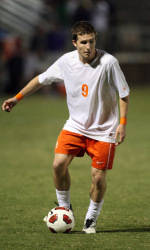 Clemson enters the contest with a 3-7-3 overall record and 0-3-2 mark in conference action. The Tigers are led in scoring by Tommy Drake with three goals and three assists for nine points. Riley Sumpter also has three goals and one assist for seven points. In the defensive third, Clemson has allowed only 15 goals and has a 1.07 goals against average. Freshman goalkeeper, Cody Mizell has played all but 21 minutes and has a 1.09 goals against average, a .769 save percentage and two shutouts.

The Blue Devils are ranked 18th in this week’s College Soccer News Poll. Duke is 24th in both the NSCAA and Soccer America rankings and landed at 20th in the Soccer Times poll.

Duke captured a 2-1 overtime win over High Point in a midweek contest. The Blue Devils are 6-3-4 overall and 1-2-2 in the ACC. Duke is led by Ryan Finley with 12 goals and two assists for 26 points. Senior Cole Grossman has four goals and five assists for 13 points. Defensively, Duke has allowed 11 goals on the year and owns a 0.79 goals against average. In goal, sophomore James Belshaw has made 56 saves and sports a 0.68 goals against average and a .862 save percentage.

This will be the 50th meeting between Clemson and Duke on the soccer field. The Blue Devils lead the overall series 23-22-4. The series began in 1939.