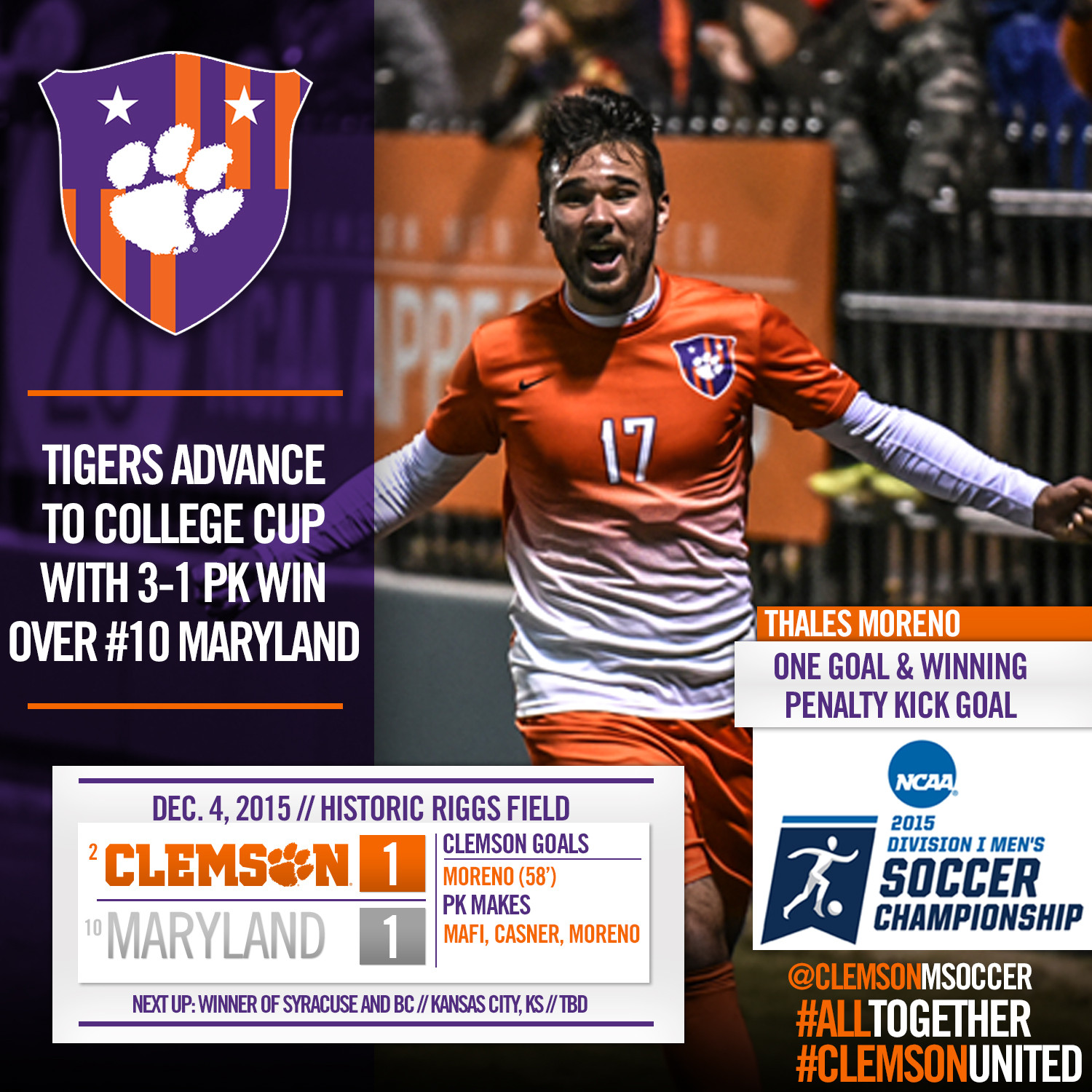 CLEMSON, S.C. – Junior midfielder Thales Moreno scored a goal in regulation as well as the winning penalty kick, and redshirt junior goalkeeper Andrew Tarbell came up with two incredible saves on PKs, to send the No. 2 National Seed Clemson men’s soccer team to the NCAA College Cup on Friday night at Historic Riggs Field. The Tigers (17-2-3) tied No. 10 Maryland 1-1, and advanced 3-1 in penalty kicks, to reach the College Cup for the first time in 10 years, and just the eighth time in program history.

“First of all, give a lot of credit to Maryland, they played exceptionally well, but so did we,” said the Tigers’ sixth-year head coach Mike Noonan, who will be making his first trip to the College Cup as a head coach after reaching the Elite Eight three times in his career. “We came out with a renewed sense of purpose in the second half. We stepped up the defense and that created the offense.

“The crowd was amazing and kept us in it, and down the stretch we got even stronger. The credit goes to the players for the work they have put in all year, and also to the hard work and dedication of our strength and conditioning staff.”

The Terrapins had the upper hand offensively in the first half, with an 8-1 advantage in shots and a 5-0 edge in corner kicks. The stalwart Clemson defense, led by senior Kyle Fisher and freshman Patrick Bunk-Andersen, was able to keep Maryland off the scoreboard, with the assistance of three saves by redshirt junior keeper Andrew Tarbell. There were 13 fouls called on the Tigers in the first half, and four whistled against Maryland.

Clemson made adjustments at halftime, and recorded a shot and its first two corner kicks of the game in the first five minutes of the second half. At the 57:32 mark, Moreno gave the Tigers a 1-0 advantage with his fifth goal of the year. The play began with a throw-in by junior defender Aaron Jones, followed by a series of crisp passes, with sophomore midfielder Oliver Shannon and sophomore forward Diego Campos sending the final two passes into the box for Moreno to finish.

Alex Crognale tied the game at 1-1 on a header in the 73rd minute, which was scored off of a corner kick by Jorge Calix. For the second half, Clemson led 9-8 in shots, which included a couple of good chances, and 8-4 in corners, but the game remained tied at the end of regulation, sending the Tigers to overtime for just the third time this season.

The two teams played two, scoreless, 10-minute overtime periods, with Clemson having a 6-2 advantage in shots and Maryland leading the way in corner kicks, 3-0, before the game ultimately ended in a draw and went to penalty kicks.

Junior defender Iman Mafi handled the first PK for the Tigers, which was a make. He is now four-for-four on penalty kicks on the season. The Terrapins made their first PK, which was followed by a Clemson miss. Tarbell saved the next two Maryland PKs, with a Tiger miss in between. Senior forward T.J. Casner stepped up to the line next, and was successful on his attempt, before the next Terrapin player’s shot went over the top of the goal. Moreno was up next, and, with the pressure of the College Cup hanging in the balance, drilled his shot into the top of the net.

“I wasn’t nervous,” noted Moreno. “I’ve been practicing PKs in training the past few weeks and I felt confident.”

Tarbell, who, in addition to the two saves in the penalty kick round, also posted five saves in regulation, was successful in the first penalty kick shootout of his collegiate career.

“It’s just instincts,” he said. “We practice PKs, but that doesn’t simulate the game atmosphere. It’s about instincts and confidence, and also about the belief in your teammates that they are going to score.”

When asked about advancing to the College Cup, Tarbell, one of the team’s three captains, noted, “It’s a pretty surreal feeling right now, but we still have two more to go. It’s fun to celebrate now for a few minutes, but we haven’t done anything yet.”

Clemson now heads to the College Cup, in Kansas City, Kansas, with the semifinal games to be played on Friday, Dec. 11 at Sporting Park, the home of the Sporting KC of the MLS. The Tigers face the winner of the contest between two ACC foes, Syracuse and Boston College, which will be played on Saturday, Dec. 5 at 2 p.m.