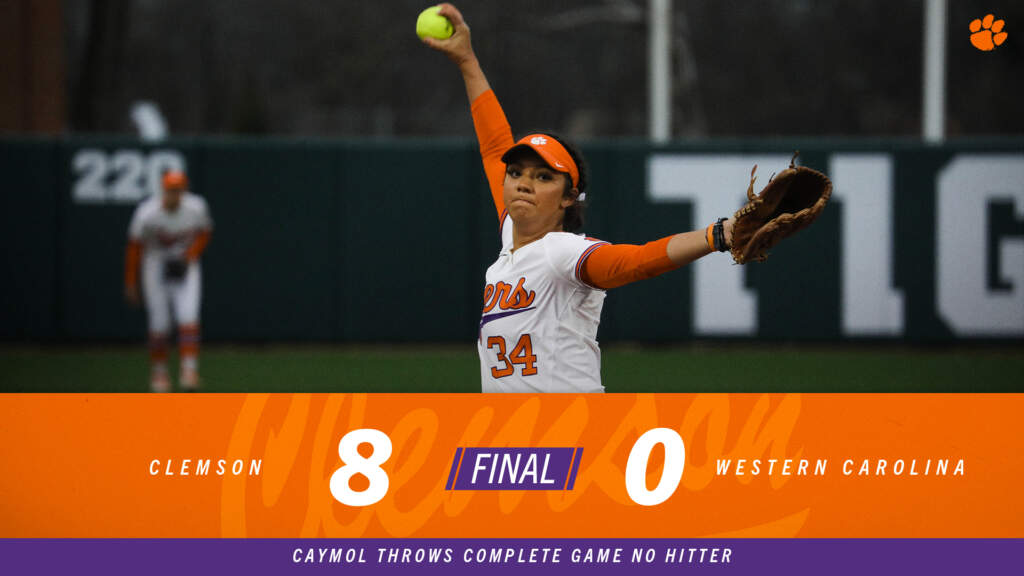 CLEMSON, S.C. – Clemson freshman right-handed pitcher Logan Caymol did not allow a single hit and struck out 11 batters as the Tigers defeated Western Carolina 8-0 in five innings in its first home win in program history Wednesday evening. Clemson played in a doubleheader against the Catamounts for the grand opening of the Clemson Softball Stadium. After dropping the first game 2-0, Valerie Cagle hit a 252-foot shot to left-center in the first inning of the nightcap and Clemson never looked back.

🎙 Postgame reaction from Logan Caymol after she throws a no-hitter to shut out Western Carolina 8-0 and secure the program's first-ever home win… pic.twitter.com/NjFNbYSsqk

“You can’t throw a no-hitter without an amazing catcher and an amazing defense,” said Caymol. “It’s such an honor to be able to be in this position, especially with this crowd in here. It’s just amazing.”

Caymol dazzled for the Tigers (3-4), facing just one batter over the minimum. Clemson’s top-four hitters were 8-for-11 in the second game en route to leading the Tigers to victory.

“I mean a no-hitter and 11 strikeouts [is] a dominating performance and it took a lot of pressure off of us,” said Clemson Head Coach John Rittman. “We’re super excited about getting that win, and what a great atmosphere. Like I said, tonight was just special to be a part of – to be a part of history.”

After Cagle’s homer in the first, which scored junior Grace Mattimore, Clemson tallied four runs in the fourth, which was highlighted the program’s first-ever triple by freshman catcher JoJo Hyatt. Hyatt’s extra-base hit also scored freshman outfielder Alia Logoleo, who made her Clemson debut in Wednesday’s nightcap. Mattimore notched a bases-loaded single in the fifth to end the game with junior infielder Bailey Taylor crossing the plate.

“We had a couple of opportunities score [in the first game] and just couldn’t get the timely hit and unfortunately they got two timely hits – and that softball sometimes,” said Rittman. “We had more hits than them and I thought we really played well. We just came up on the short end of the stick. I was really proud of our team the way they battled back in the second game.”

Cammy Pereira goes 3-for-3 at the plate and 1 RBI to help the Tigers to an 8-0 shutout! pic.twitter.com/p6PhLgGtRM

Up next, Clemson is set to host Maryland and Michigan State as part of the Big Ten/ACC Challenge (Feb. 14-16). The tournament also features Pitt, who will also matchup against the Terrapins and Spartans. For the complete Big Ten/ACC Challenge schedule, click here. To access Clemson Softball live stats, visit bit.ly/ClemsonSBStats.

THE SWINNEYS?! DEXTER LAWRENCE?! "SOME GUYS?!"

It was a party at the Clemson Softball Stadium tonight 🎊🎉🥳 pic.twitter.com/rlwqULGWWS