CLEMSON, S.C. – Clemson freshman right-handed pitcher Valarie Cagle worked her way into a hitter’s 3-0 count before sending a solo homerun over the left-center wall on the next pitch in the bottom of the seventh inning to walk off, 8-7, against Virginia (8-6, 0-1 ACC). The win gave Clemson its first ACC win the program’s first conference matchup. Freshman right-handed pitcher Emma Whitfield earned her first collegiate win in the circle after completing 2.0 innings of relief work without allowing a hit.

Cagle’s walk-off home run was her seventh homer of the season. She entered Friday’s game tied for eighth in the nation in home runs and second in the ACC – behind teammate Marissa Guimbarda, who is second in the country with eight homers on the year. Cagle, who tallied her tenth start of the season in the circle and tossed 5.0 innings before being relieved by Whitfield, went 4-for-5 on the night and plated two RBIs.

Virginia struck first in the ball game, using three hits and a Clemson error to register a run in the top of the third. The Cavaliers added to their lead in the fourth, tacking on two more runs on a Ashley Jennings home run to left field to give UVA a 3-0 lead.

🎞 Highlight reel catch, for sure!

The Clemson bats heated up in the bottom half of the fourth as the Tigers scored four runs on four hits and a Virginia error. Freshman outfielder Alia Logoleo led off the inning with a double to left field to extend her hit streak to six games. Two batters later, Bailey Taylor drove in her sixth run of the season after what initially appeared to be a strikeout.

🎞 Highlight reel catch, for sure!

The umpire’s awarded Taylor second chance in the batter’s box after a Cavalier substitution infraction, which put Taylor back at the plate with an 0-2 count before the junior infield found the gap in left-center to get the Tigers on the board with an RBI double and kickstart a four-run inning for the Tigers. Following a Cavalier error and a hit by pitch, junior outfielder Grace Mattimore tied the game 3-3 with the Clemson’s third double of the inning. With Mattimore on second base, Cagle knocked in her 19th run of the season on an infield single to the shortstop to give the Tigers their first lead of the game, 4-3.

After a Cavaliers strikeout, followed by a called substitution infraction, Bailey Taylor nabs a standup double, knocking home Alia Logoleo to put the Tigers on the board!

Virginia then re-gained the lead – 7-4 – in the top half of the fifth after taking advantage of two hits, one sac fly and four Tiger errors to score four runs in the inning.

The Tigers clawed their way back into the game in the bottom of the sixth, pulling even with Virginia –  7-7 – after JoJo Hyatt’s RBI bloop single fell just beyond second base, which was followed by a Taylor RBI fielder’s choice.

Tigers have scored three unanswered between the fifth and sixth innings.

In the top of the seventh, Whitfield retired the Cavaliers in order, with two of the outs coming via the strikeout. In the Clemson home half of the seventh, a lead-off hit by pitch earned Cammy Pereira first base. After a pop-up bunt, Virginia turned the double play to record the first two outs of the inning, but Cagle’s homer ended the game in walk-off fashion.

Freshman RHP Emma Whitfield enters the circle in the top of the sixth and goes in 1-2-3!

The series continues Saturday at 1 p.m. on ACCNX. For tickets, visit ClemsonTigers.com. 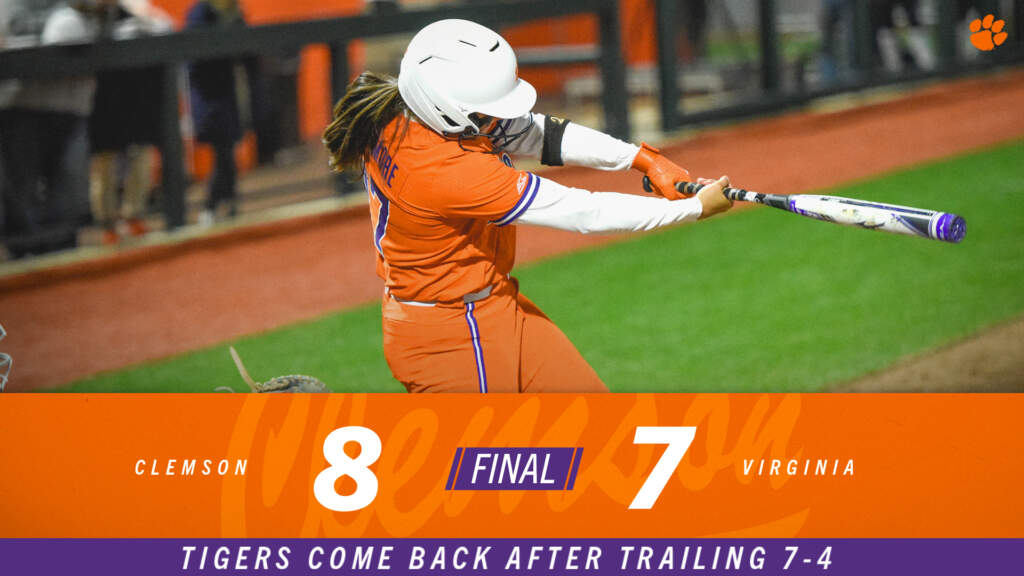