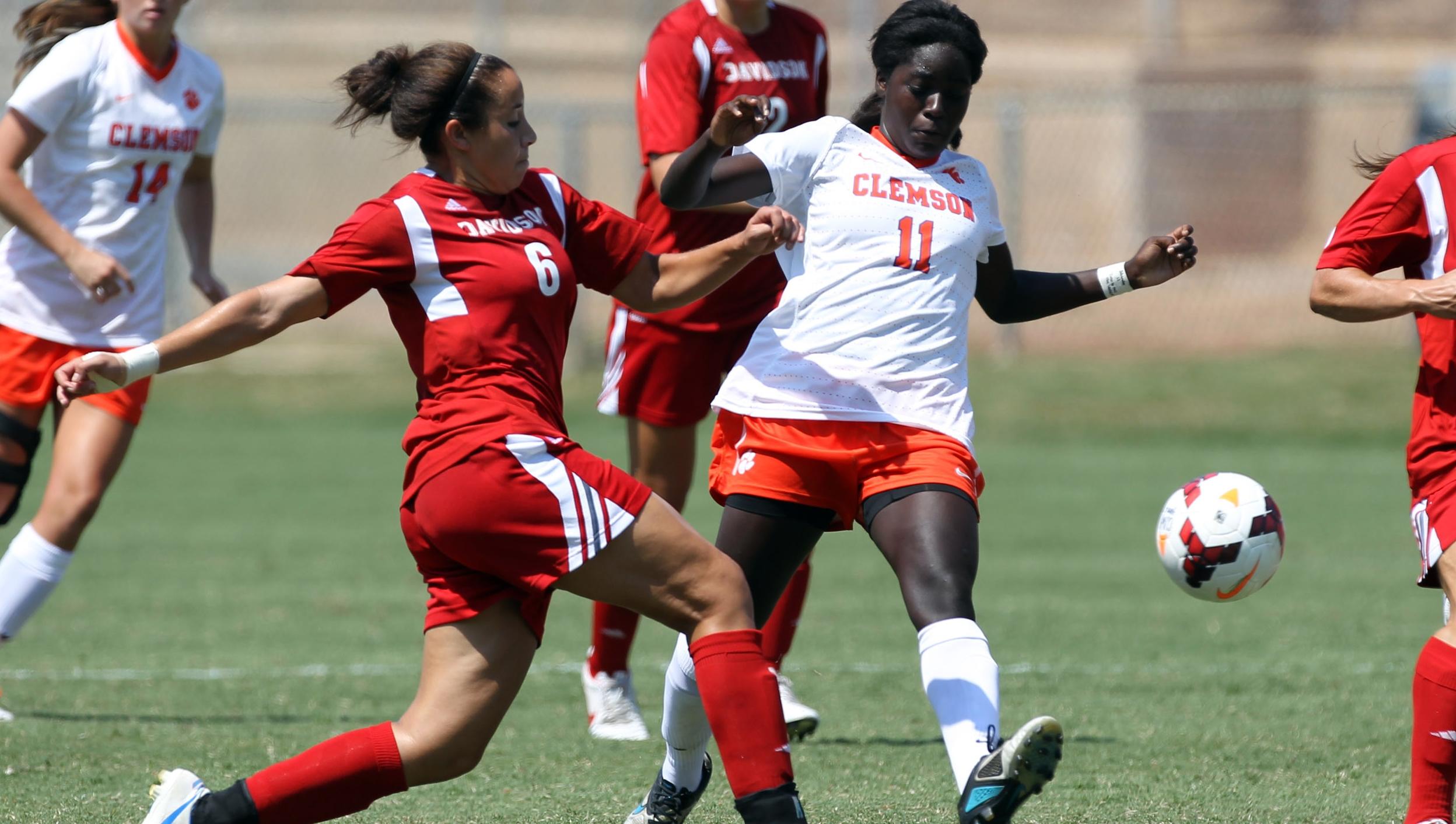 CLEMSON, SC – Behind an offensive explosion and two goals from freshman forward Catrina Atanda, the Clemson women’s soccer team defeated Davidson by a score of 2-0 Sunday afternoon at Historic Riggs Field.  With the win, the Tigers improve to 2-1-2 on the season, while the Wildcats fall to 0-3-3.

“It was good to get the win, and the shutout,” said Head Coach Eddie Radwanski.  “It’s not easy playing back-to-back Friday-Sunday games.  Before the game, we talked about putting our stamp on the game, and I felt we did that today.  We were patient in the attacking third and created a number of opportunities.  Obviously, I would have liked to put a few more balls in the net, but give credit to the Davidson goalkeeper, who played a good game.

“We have a young group of players who still have a lot to learn, but our effort and concentration thus far have been very good.  We played a tough nonconference schedule on purpose and now we begin the very difficult ACC portion of our schedule next week.  I’m pleased with everything I have seen and everything we have learned so far, but there is still a lot more to be done.”

Atanda put the Tigers on the scoreboard in the 29th minute with her second goal of the season.  Freshman midfielder Abby Jones sent a pass out to Atanda, who launched a left-footed shot into the top right corner of the net off the outstretched hands of the diving Davidson keeper Rachel Locke.

Atanda added to the scoring column with her second goal of the game in the 83rd minute.  A give-and-go pass from sophomore midfielder Jenna Polonsky gave Atanda a breakaway where she netted the ball in the lower right corner of the goal from inside the box.

“It means a lot to get this win,” said Atanda.  “We had a tough game on Friday, and we let our emotions fuel us going into today’s game.  We had a lot of good movement, although it would have been nice to score a few more goals.  Still, it’s good to get the win.”

Clemson dominated the game from the start, outshooting Davidson 32-0 with 10 corner kicks compared to the Wildcats’ zero.  The shutout was the team’s third of the year.

The Tigers will continue their streak of six consecutive home matches next week, as they begin play in the Atlantic Coast Conference.  Clemson will play host to 16th-ranked Maryland on Thursday, September 12 at 7 PM and Boston College on Sunday, September 15 at 1 PM at Historic Riggs Field.  Both matches will be broadcast live on ClemsonTigers.com via ESPN3.  Updates will also be available on Twitter by following @clemsonwsoccer.