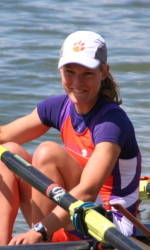 CLEMSON, SC – Clemson rower Allison Colberg was given the Elite 88 award for Division I women’s rowing in the award’s inaugural season. The Elite 88 is an award founded by the NCAA. It recognizes the true essence of the student-athlete by honoring the individual who has reached the pinnacle of competition at the national championship level in his or her sport, while also achieving the highest academic standard among his or her peers. The Elite 88 is presented to the student-athlete with the highest cumulative grade-point average participating at the finals site for each of the NCAA’s 88 championships.

Colberg, a senior from Six Mile, SC, graduated from Clemson in 2010 with a 4.00 GPA and a degree in Mathematical Sciences with an emphasis in Actuarial Science/Financial Mathematics. She competed with the Varsity 4+ for most of the 2010 season, and was a member of the crew that finished 10th in the nation at the NCAA Championships. She was also a member of the 2009 Varsity 4+ National Championship boat.

All the award winners can be found at http://www.ncaa.com/elite88/.