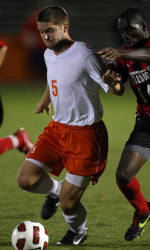 COLLEGE PARK, MD–Paul Torres scored one goal and had one assist in leading fourth-ranked Maryland to a 3-2 win over Clemson in an Atlantic Coast Conference men’s soccer match at College Park, MD Saturday night.

Maryland scored two goals late in the first half. Sunny Jane scored on a left-footed eight-yard shot for his first of the season in the 39th minute.

The Terrapins scored 1:46 later as Paul Torres scored on a header with an assist by London Woodbury.

Clemson scored its two goals in the second half to tie the score 2-2. The Tigers’ Austin Savage struck first scoring from a 15-yard shot in the 55th minute of play for his fourth goal of the season.

The Tigers tied the score 2-2 in the 73rd minute as Tommy Drake scored his third goal of the season with an assist by Nick Burton.

Jason Herrick scored the game-winner on a header from close range with an assist by Torres with 14:28 left to go in the match.

Clemson has lost to three ranked opponents this season all by only one goal in each match. The Tigers will play host to Georgia Southern on Tuesday, October 19, in the Tigers’ next action.