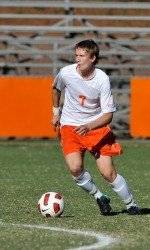 ACC Scholar-Athlete of the Year honors were established in September 2007 to be awarded annually to the top junior or senior student-athlete in their respective sports. Candidates must have maintained a 3.0 grade point average for their career as well as a 3.0 for each of the last two semesters.

Stockinger played and started in 16 matches for the Tigers at the midfield position. The freshman is an economics major from Surrey, England. He finished the year with three assists.

Bo Godwin played in 17 matches and started 15. He was a sophomore in 2010 and has been named to the ACC academic Honor roll for the past two seasons. He redshirted the 2008 campaign.