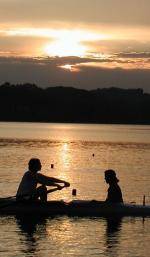 The seventh season of Clemson rowing promises to be an exciting one for Head Coach Susie Lueck and her staff. Over the last few years, the program has reached new heights, and will continue to do so thanks to consistent progress in both recruiting and producing results.

“This year’s team has high energy and great leadership,” Lueck said. “They are committed to a solid year.”

The Tigers return a significant portion of last year’s team, including 10 student-athletes (two coxswains) who rowed with the varsity 8+ in at least one spring regatta. Mary Nell Green and Robin Mescher, All-ACC selections in 2004, are both back to lead the Varsity 8+ again this season. Both were CRCA National Scholar Athletes in 2004 as well.

Liz Averyt, Ashlee Brown, Cati Harris, Jaclyn Rath, Candice Woodward, and Jen Wortman also raced with the Varsity 8+ last season. Averyt accomplished a phenomenal feat by earning a seat in the varsity 8+, despite being just a freshman. Harris, Woodward, and Wortman all began the spring season in other boats before moving up to the first varsity 8+ by the end of the season.

Clemson returns three experienced coxswains, who will provide the bulk of the leadership and serve as an integral part of Clemson’s plans this season. Sarah Canterbury, a senior from Moon Township, PA, coxed the Varsity 8+ the majority of the spring season. However, junior Megan McCleskey coxed the Varsity 8+ during the ACC Championships. Junior Liz Yost returns as well for Clemson, as she coxed the varsity 4+ for most of the spring season.

Lueck made reference to the strong leadership she believes will be exhibited by this year’s team. Each class selected members to represent them on the leadership council. The council for the 2005 spring season is already in place. The senior leaders are Brown, Green, and Mescher. The junior representatives are Harris, McCleskey, and Kristen Weinacker. The sophomores on the council are Averyt, Barbi Breimann, Sarah Cooper, and Margaret Gattis. Of the newcomers, several leaders have surfaced this fall. Krista Gregan, Lizzy Jennings, Kristin Karfgin, and Tami Mayer were all chosen for the leadership council.

The Tigers completed the fall season successfully, and both the varsity and novice programs made strides. Clemson began the fall season, which is marked by aerobic conditioning and intense training, by playing host to neighboring foes South Carolina and Georgia in the Tail of the Tiger regatta on Lake Hartwell. Clemson was impressive in that event, winning each race it entered.

Clemson also competed on the national and regional scene this fall. The Tigers rowed in the Head of the Charles (Boston, MA), Head of the Tennessee (Knoxville, TN), and Head of the Chattahoochee (Gainesville, GA).

The Tigers showed resiliency at the Head of the Tennessee regatta. Windy conditions and rough water made it a trying event for the rowers, but they persevered and were able to bring home some good finishes. The novice teams had two boats finish 1-2 in the collegiate novice 8+ race, while the Tigers swept the first three finishing positions in the collegiate novice 4+ race. The varsity program had two boats finish second and third behind host school Tennessee in the championship 8+ race.

The Head of the Chattahoochee proved successful once again for the novice teams. Clemson had a boat win both the 4+ and 8+ freshman collegiate events at the regatta. It proved to be a great momentum builder for the spring season.

Beyond the success on the water, Clemson rowing constantly aspires for academic achievement. Over the last four semesters, the rowing team has had the highest cumulative GPA of all Tiger athletic programs. Clemson has 28 rowers on this year’s roster that have been named to the ACC Academic Honor Roll at least once. No other program in Tigertown can make that claim.

For the second consecutive year, Clemson has the same staff in place. Kelly Lynch, two-time regional assistant coach-of-the-year, returns for her seventh season with the Tiger program alongside Lueck.

“Kelly does an outstanding job of coaching first-year collegiate athletes while helping them transition to Division I, ACC competition,” Lueck said. “She creates an environment where they develop enthusiasm, discipline, commitment, determination, and teamwork.”

Farrell Finstad, a former Tiger rower, is in her second year as the Tigers’ second assistant coach. “Farrell is drawn to collegiate coaching because of the opportunity she has to make a significant impact on the young women she works with,” Lueck said. “She is an outstanding role model for those currently in the program she helped build.”

Emily Kuivila is also in her second year with the staff, as she serves as director of rowing operations. She has been a integral part of the tremendous recruiting classes at Clemson over the past two years. “Emily is responsible, hard-working, self-motivated, and a team player,” noted Lueck. “She is willing to serve and work as a key ingredient within our staff.”

When taking into account the returning rowers, the newcomers, the staff, and the facilities, Clemson rowing looks to be on the right track to building itself a national reputation. However, the schedule will present a tall task for Clemson as it prepares to take its performance to the highest level.

The spring schedule is highlighted by three home regattas, including the ACC Championships for the second consecutive year. The Tigers begin the year at home in a dual regatta versus Eastern Michigan on March 5. Two weeks later, the Tigers host three schools training in Clemson for spring break in the Clemson Challenge on Lake Hartwell. In the early-season race, the Tigers will face Indiana, Purdue, and Marist. After three away competitions, the Tigers return home to host the ACC Championships for the fourth time. With the addition of Miami (FL) to the ACC, this will be the first year that there are five boats competing in each event.

The Tigers have three opportunities to travel for out-of-region competition during the spring season. The first road trip concludes the Tigers’ week of spring break training when Clemson travels to Oak Ridge, TN to take on Dartmouth and Cincinnati. The Tigers then travel to California for the San Diego Crew Classic, where they face crews from many regions. The following weekend, the Tigers return to California, where they are one of four east coast teams invited to the Windermere Crew Classic held in Redwood Shores. Clemson, Texas, Virginia, and Wisconsin will compete against California, Stanford, UCLA, and Washington in dual races over two days. These challenging opponents, with the exception of UCLA, have previously raced at the NCAA Rowing Championships.

“The strength of this spring race schedule gives us an opportunity to prove our speed on the national level,” Lueck said. “The rowers are committed daily to their trademark of consistency and intensity to forge ahead against national competition.”