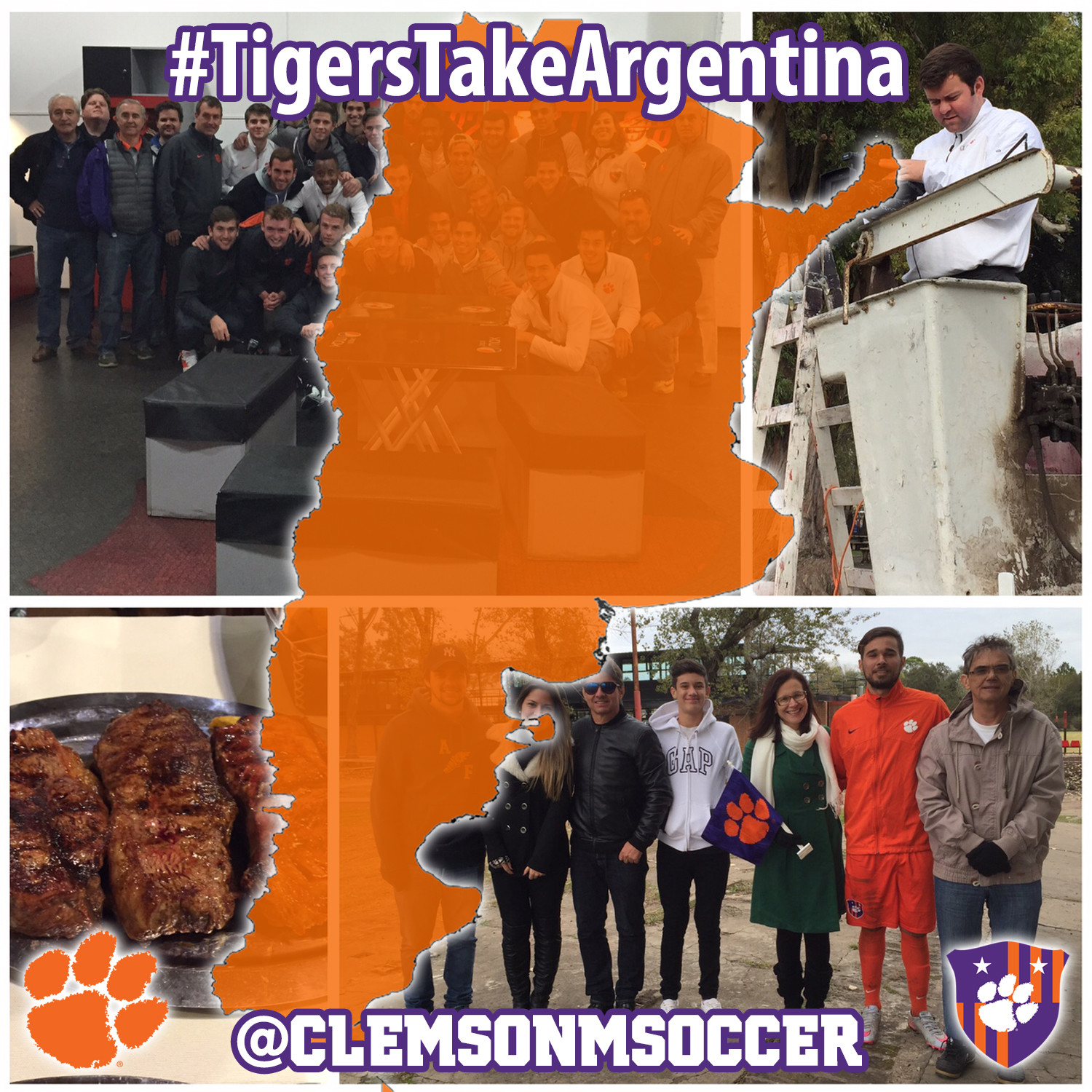 On Thursday morning, we played our first of two matches in Rosario. Before play began, we saw a group of people arrive, with a Clemson flag! It turned out to be Thales Moreno’s parents and family, who made the three-hour trip from Thales’ hometown in Monte Santo de Minos, Brazil! We certainly weren’t expecting to have fans at any of our matches, so this was quite a surprise. Unfortunately, the team suffered a 2-1 loss to Newell’s Old Boys, however, it was pretty neat that Thales was the one to score our lone goal, on a penalty kick, with his family watching!

Tigers Fall to Newell’s Old BoysThe Clemson men’s soccer team suffered a 2-1 loss to a team of select U-18, U-19 and U-20 players from Newell’s Old Boys on Thursday morning in Rosario. The Tigers are now 1-2-1 on their international tour of Argentina.

“I thought we started out well, and we had a shot hit the cross bar,” said Head Coach Mike Noonan. “The first goal is always important, and our opponent got the first goal today. After that, our response was not very good. We were flat the rest of the game. The equalizer in the second half gave us a little bit of a lift, and I’m happy that Thales scored in front of his family.

“Part of the purpose of the trip was to find out who can contribute and help us in big games in the fall, and the past two games have helped give us some answers. I’m disappointed that we lost, but more disappointed in our mentality coming off a big win two days ago.”

Midway through the first half of play, the Tigers had a good scoring opportunity, when Grayson Raynor sent a cross into the box from the right side, however, Saul Chinchilla’s shot hit the crossbar. Shortly after, Newell’s Old Boys found the back of the net when a shot sailed into the top left corner of the next past the outstretched arms of a diving Michael Zierhoffer.

NOB maintained the 1-0 lead until 15 minutes in to the second half, when a Clemson player was taken down in the box. Thales Moreno handled the penalty kick, and was successful, tying the match at 1-1. With 10 minutes left in the contest, Newell’s Old Boys regained the lead, scoring on a free kick that hit the post and deflected into the back of the net. The Tigers put the offensive pressure on for the remainder of the match, but were unable to score the equalizer. Zierhoffer tallied six saves in the match, which was his first game action of the trip.

Clemson plays its final match of its Argentina tour on Saturday morning against Rosario Central.

After the match, we showered, changed, ate lunch at the hotel and headed out for a tour of Newell’s Old Boys’ stadium, Estadio Marcelo Bielsa. Rising senior defender Mauriq Hill shared his thoughts on the visit:

Before the trip, I had done a little bit of research on each of the clubs we would be visiting, since I’m taking the class Soccer in the Global Society, as the study abroad part of the trip. Newell’s Old Boys’ stadium, El Coloso del Parque, has a unique shape that holds up to 39,000 people, but in person, the stadium felt smaller than that. On television, when Newell’s has a game, the stadium looks huge because of the number of people that are there. During our visit to the stadium today, the Newell’s Old Boys reserve team had a match, but, since it was the reserve team, the stadium was nowhere close to being full.

One thing I found interesting about the behind-the-scenes tour of the Newell’s Old Boys stadium was the locker room. Having been in Argentina for over a week now, I have noticed that a majority of the population is Catholic. In Newell’s locker room, there was a shelf near the entrance that was full of religious statues and symbols that the players pray to before going on the pitch. This reminded me of the football team FC Barcelona, because they have a chapel close to their locker room where the team prays before walking out on to the field.

Tonight’s dinner was in a traditional Argentinian steakhouse, and it was a lot like what we think of at Brazilian steakhouse, where they just continue to serve more meat until you tell them to stop. Tonight’s meal started with what has become one of our favorite appetizers, provoleta, and was followed by salad, pork belly, papas fritas (French fries), filet and then beef ribs. Everyone in our group said “stop” after the beef ribs, so then it was time for dessert (chocolate mousse, tiramisu or flan) before we headed back to the hotel. By the time we finished dinner, it was 11 p.m., and we were starting to feel like real Argentinians!

It’s hard to believe, but tomorrow will be the final training session of our trip, as we have a match Saturday and then Sunday we begin our travel back home to Clemson. It’s been an amazing trip so far, and we’ve learned a lot, both on the field and off, but there are still a few things we would like to accomplish, and we’ll work towards those goals over the final few days of the tour.