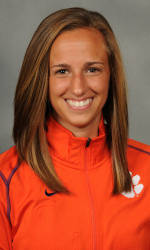 #13 Clemson falls to #3 University of Southern California in Charlottesville, VA

The best race of the day was the 1st Varsity 4 race. USC jumped out to an early lead and appeared to have the race under control, but Clemson refused to be denied. About 1300 meters into the 2000-meter race, the Tigers made a powerful move to try and keep the race close, but in the process managed to put their bow just in front of USC. Clemson held a very slight advantage with 200 meters to go, and USC responded with their own fantastic move, and managed to pull ahead just before the line to finish 1.5 seconds ahead of the Tigers.

“I was really impressed with the fight in our Varsity 4 today,” said Clemson head coach Jenna Zylstra noticed that USC appeared be vulnerable, and let her crew know that the race was still up for grabs. We used a lot of energy pulling ahead of the Trojans, but just did not have enough left to hang on at the end. It was a gutsy performance by our four, and I am so very proud of their efforts.”

The 2nd Varsity 8 race was controlled early by # 3 USC, but the Tigers held in there for the first 1000 meters before the Trojans pushed the margin out to 10 seconds at the finish line.

“We fought hard today in the 2nd 8 race, and USC was just a bit better than us today,” said Tenenbaum. “We hope we get the chance to race them again at NCAA’s in May.”

In the first Varsity 8 race, it was Clemson that pulled out to an early lead, but USC managed to inch their way ahead by the 500-meter mark. USC moved out over the next 1000 meters before Clemson started to hold off the Trojans moves. However, in the end, it was USC finishing 11.6 seconds ahead of the Tigers.

Schedule note: Due to severe weather in the Charlottesville, the next set of races will take place on Saturday evening at 6pm, weather permitting. If we have bad weather again on Saturday night, the Clemson/Texas race will be moved to early Sunday morning, then followed by the Clemson/UCLA race later on Sunday morning.