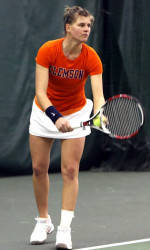 CLEMSON, SC – Rookie Ina Hadziselimovic and Hoke Sloan Tennis Center and is scheduled to begin at 1:00 pm on Saturday.

North Carolina knocked off Georgia State, 4-0, in earlier action on Friday at the Clemson regional. The meeting will be the third between the Tar Heels and Tigers this season with each team posting a victory.

Clemson has now advanced to the second round of the national tournament for the eighth straight year.

“We practiced very hard this past week and were absolutely delighted to get the win today,” said Clemson Head Coach Nancy Harris. “Winthrop played very well; they were a great first-round match for us to prepare us for tomorrow (against North Carolina).”

The Tigers quickly captured the doubles point and a 1-0 lead in the match as Clemson teams dropped just two games in all three matches. Ina Hadziselimovic improved to 14-6 with their 8-1 win over Lisa Wilkinson and Sandra Herrera.

Clemson’s tandem of Alexandra Luc and Federica van Adrichem were leading the Eagle team of Sara Abutovic and Paula Pereira at flight three before play was called.

In singles play, Hadziselimovic scored the second point of the day with a straight set victory over Coimbra at the second position, 6-3, 6-0, to improve tie her personal record for wins in a season with 22. Wong then put the Tigers up by a 3-0 margin as she defeated Herrera at flight three. The freshman from Jackson, MS is now 26-9 for the season and has won 13 of her last 14 matches.

Bek then wrapped up her match moments later to clinch the match for Clemson. Playing at flight one, the native of Osijeck, Croatia lost just two games in the match for the 6-1, 6-1 victory.

“As a team, everybody was so concentrated. Everybody was fighting hard and, luckily, we were the first team to four points,” she commented afterwards and encouraged fans to support the team in its battle with the Tar Heels on Saturday. “I hope our fans will come and cheer for us tomorrow against North Carolina.”

The matches at flights four, five and six were stopped after Clemson clinched the victory.

Tickets will be on sale at 12:00 pm at the entrance to the Hoke Sloan Tennis Center. Prices are $5 for adults and $3 for students, youth and senior citizens.