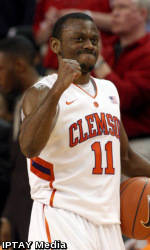 CLEMSON, SC – Andre Young’s pleas not to be carried off the court, the 6-foot-7, 225-pound Sullivan did it anyway, throwing the much smaller Young over his shoulder and carrying him off the court.

“I told him not to do it, but those freshmen are hard headed,” Young said.

It was a moment Clemson’s senior guard deserved, despite his uneasiness. He made one three-pointer to tie the game as overtime was winding down, and a second one with 11.8 seconds left to lift the Tigers to a 72-69 victory over NC State in front of a packed house at Littlejohn Coliseum.

“Up to that point, I really was not making a lot of shots and I was really frustrated,” Young said. “I really have to give a lot of credit to the coaches, my teammates and give thanks to God to give me the courage and the strength to really try and take that shot.

“It went down. And when it went down, it felt good.”

Clemson improves to 15-13 overall with the win, including 7-7 in the ACC. NC State falls to 18-11 and is 7-7 in the ACC. The Tigers can still finish fourth in the conference standings, and possibly earn a first-round tournament bye, should the Tigers win out and Virginia loses its remaining games. However, Clemson did secure no worse than a No. 8 seed in the ACC Tournament with Saturday’s victory.

Tanner Smith added 15 points and five assists. Young finished the afternoon with 12 points to go along with three assists. Devin Booker had 10 rebounds and scored nine points in the post.

Young didn’t start Saturday too well. He missed on his first five attempts behind the arc before nailing a deep-wing three-pointer with 1:13 to play in overtime to tie the game at 69-69.

“Making that shot definitely helped a little bit,” he said. “It was a little confidence boost, but I definitely have a lot of courage to take the shot, and it went down.”

A lot of things had to happen before Young’s heroics at the end. After losing an eight-point lead midway through the second half, the Tigers needed a series of NC State mishaps and a few fortunes to get the victory. First, the Wolfpack were only 5 of 13 from the foul line, including two misses by C.J. Williams, with NC State ahead two, that could have sealed a win with 15.4 seconds to play.

On the ensuing Clemson possession, Smith was fouled by Richard Howell with 4.1 seconds to play in regulation. Shooting the first of his two free throws, Smith’s attempt rimmed around the back end of the cylinder before sticking to the front end of the basket and then falling through.

“The first did not want to go in. It did not want to,” said Smith, who was 8 of 9 from the charity stripe. “I think all the air that got sucked out of the gym when it was sitting up there pulled it through. It was pretty funny, and I’m glad it dropped.”

Smith made the second shot drop with ease to force overtime. In the extra frame, it again appeared NC State was in control when Lorenzo Brown made a layup with 2:24 to go for a 69-66 lead. Following misses by both teams, Young stopped and popped on an open three to tie the game.

NC State had an opportunity to take the lead on its next possession, but this time Brown missed two free throws with 43.7 seconds left, setting up Young’s game-winner.

“That’s what makes wins like this really sweet. That’s what shows the character of the kids on our team,” Clemson Head Coach Brad Brownell said. “I’m proud of them for hanging in there today. We kept fighting.”

Clemson’s good fortune on this day continued a few moments later, when Young hit a corner shot, one in which he was shooting off balance, on an inbounds pass from Smith with 11.8 seconds to play.

“I hate to think the basketball gods have not been smiling on us all those other times. That’s not a very good feeling going forward,” Brownell said. “Certainly you hope things even out a little bit – and this is one they (Smith and Young) deserve because of how hard they have worked and what they have done every day. It’s because of the kind of kids they are.

“They deserve for this to go their way.”