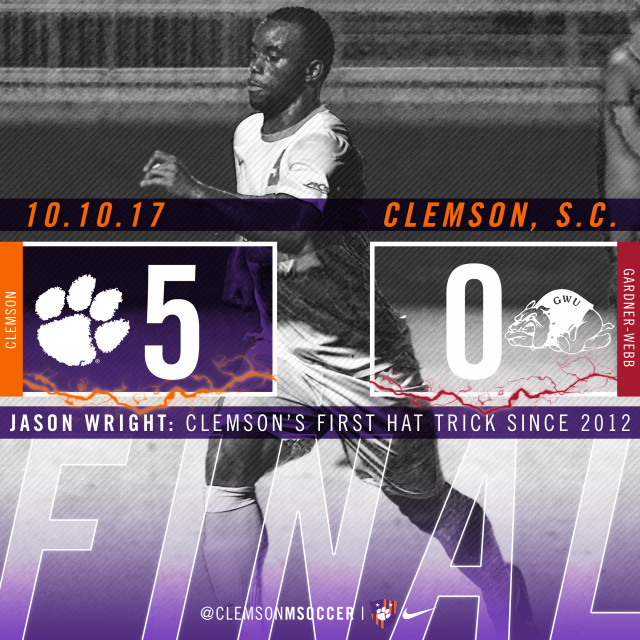 CLEMSON, S.C. – Jason Wright netted Clemson’s first hat trick since 2012, powering the No. 11 Clemson men’s soccer team past the Gardner-Webb Runnin’ Bulldogs 5-0 on Tuesday night at Historic Riggs Field. With the win, Clemson improves to 9-3-0 on the year, while Gardner-Webb falls to 5-4-1.

Oliver Shannon gave Clemson an early 1-0 lead in the 10th minute on a soft shot from 17 yards out after a Gardner-Webb defender tried to clear the ball but deflected it off of Grayson Raynor, who redirected it to Shannon for the score. Wright doubled the Tigers’ lead to 2-0 just six minutes later, dribbling in from the right side of the box and netting a shot from 12 yards.

Wright put the Tigers up 3-0 in the 56th minute with the second of his three goals, a give-and-go from Diego Campos that Wright netted from 16 yards out. Wright rounded out his hat trick and team-leading seventh goal in the 67th minute, heading in a shot from eight yards out that was assisted by Campos and Robert Campbell. Robby Jacobs scored Clemson’s final goal of the night in the 86th minute when Johnny Heckman played a deep through ball to the right side of the box that found the left foot of Jacobs.

For the match, 25 Clemson players saw action, and the Tigers outshot the Runnin’ Bulldogs 34-4, with a 14-0 advantage in shots on goal.

“I’m happy that we kept a clean sheet,” head coach Mike Noonan said. “There were a couple of lapses, but I thought the team responded well coming off of the two losses [against Wake Forest and Notre Dame] and did what they needed to do. Now, the sharp edge of the knife is ahead of us, and we’ll enjoy this for a couple of hours, and then we’re off to prepare for Duke.”