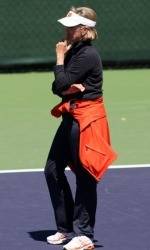 GREENVILLE, SC – The Clemson women’s tennis team got the fall season underway with the Furman Fall Classic at the Mickel Tennis Center in Greenville, SC. Friday’s action included all three rounds of doubles play, as rain forced a change in the schedule. The flighted tournament features players form eight schools, including four from the SEC, three from the ACC, and the host Paladins.

There are six flights of singles, which get underway on Saturday at 9:00 am.

Josipa Bek and Keri Wong, the nation’s top-ranked doubles team, fell in the finals in flight one, 8-4, to Wu and Mira of Vanderbilt, after breezing by Hemm and McHale from North Carolina and Stojic and Alwai of South Carolina.

Sophomores Klara Vyskocilova and Monika Kochanova played their first doubles matches together, winning in the first round, before bowing out in the semis and dropping the third-place match as well. Their win came in their first match against Stanford and Bitetti of Furman, 8-4.

Singles play gets underway on Saturday. Keri Wong will play at flight one, Vyskocilova at two, and Kochanova at six.