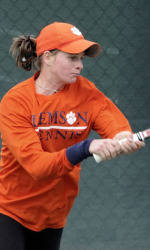 GREENVILLE, SC – The Clemson women’s tennis team competed at the Furman Fall Classic during the weekend, a strong challenge for a season-opener. Sophomore Josipa Bek, who defeated #46 Catherine Newman (VU) on Friday and #24 Noemi Scharle (FSU) on Sunday to take third place in Flight One. Freshman Nelly Ciolkowski had a strong start to her collegiate career, going 3-0 to win flight six.

Clemson returns to action from Oct. 3-11, when they travel to Pacific Palidaes for the ITA All-American Championships, a major fall tournament. Bek will be in the main draw singles, as she is ranked #9 nationally.