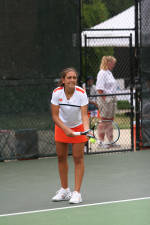 CLEMSON, SC – The Clemson women’s tennis team will travel to the state of Florida for a pair of conference matches this weekend. The Tigers (4-6) will take on 11th-ranked Miami (7-3) in Coral Gables on Friday at 12:00 pm before facing #12 Florida State (9-1) on Sunday in Tallahassee.

Ani Mijacika and Carol Salge entered the Fila/ITA Tennis doubles poll released on Wednesday at #12. The Tiger tandem has won four straight matches against ranked opponents to help the Clemson squad claim the doubles point in eight of its 10 matches this season.

Mijacika is currently listed at #3 in the singles rankings with a 17-5 record.

Friday’s match between the Tigers and Hurricanes will be the 23rd in the series history. Miami leads by an 18-4 overall margin and won a pair of matches over Clemson last season. The Tigers last defeated the Hurricanes during the 1994 season on a neutral court.

Clemson will look to extend its six-match winning streak over the Seminoles when the two teams meet at 12:00 pm at the Scott Speicher Tennis Center. The Tigers hold a 23-8 overall advantage against Florida State, including 7-2 record in matches played on the Seminoles’ home court.