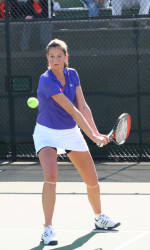 Women’s Tennis To Play At Furman On Friday

CLEMSON, SC – The Clemson women’s tennis team, ranked 13th in the most recent Fila/ITA women’s tennis poll, will make the short trip to Greenville, SC for a match-up against Furman on Friday afternoon. The Tigers (5-1) and Lady Paladins (1-3) are scheduled to begin play at 2:00 pm at the Mickel Tennis Center.

Sophomore Federica van Adrichem is undefeated in dual match play this season, boasting a 4-0 record in the spring, while freshman Ani Mijacika has compiled a 10-4 overall record for 2006-07.

Friday’s meeting between the two schools will be the 40th in a series that dates back to the 1976 season. Clemson holds a dominant 36-3 all-time advantage over Furman and has won the last four matches, including a 4-3 decision last season. The Tigers also boast a 14-2 record in contests played on the Paladins’ home court. The teams last met in Greenville during the 2004 season when Clemson posted a 7-0 sweep.