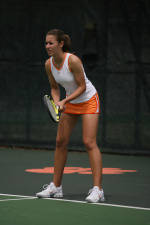 CLEMSON, SC – The 11th-ranked Clemson women’s tennis team will kick off its 2009 season on Friday afternoon as the Tigers play host to the College of Charleston. The match is scheduled to begin with doubles play at 2:00 pm at the Clemson Indoor Tennis Center. Singles matches will follow.

Clemson is led by junior Ani Mijacika, who is ranked fourth in the most recent ITA Tennis singles poll. The three-time All-American posted a 12-3 ledger during the fall tournament season and owns a career 67-18 record. Fellow Croatian Josipa Bek joined the Tiger program in the fall to give Head Coach Nancy Harris a stellar combination at the top of the lineup. Bek won eight straight matches during the fall, including six at the Wilson/ITA Southeast Regional Championship to capture the tournament title. She made her debut in the singles poll on Jan. 6 at #10 in the nation.

The highly touted Keri Wong, a Blue Chip recruit from Jackson, MS, will also begin her first spring season on Friday. She opened her collegiate career with a six-match winning streak and reached the quarterfinals of the southeast regional in October. Wong was ranked at #111 in the first singles poll of the year.

Returning to the Clemson lineup are seniors Federica van Adrichem and Alexandra Luc, juniors Estefania Balda and Ina Hadziselimovic and sophomore Laurianne Henry. Luc earned her first national singles ranking in the Jan. 6 poll with the #117 listing, while Van Adrichem was ranked 102nd in the poll. Balda and Hadziselimovic have been reliable starters for Harris over the past two years, while Henry battled back from an early-season injury to clinch the Tigers’ win in the second round of the 2008 NCAA Tournament.

Friday’s match will be the 20th meeting in history between Clemson and the College of Charleston. The Tigers have won 19 of the prior match-ups, including a 7-0 sweep of the Cougars in the first match of the 2008 season.