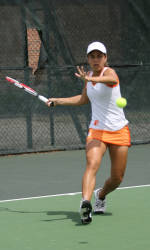 CLEMSON, SC – The Clemson women’s tennis team will kick off its fall season this weekend in Montgomery, AL as the Tigers will compete in the MCC Collegiate Clay Courts tournament. The three-day event will begin on Friday, Sept. 12 at the Montgomery Country Club.

Estefania Balda will be participating in the tournament for the second straight year, after advancing to the semifinals in singles in 2007. Balda, ranked 89th in the preseason ITA Singles poll, had a 17-17 combined record as a sophomore in 2007-08.

Clemson is led by junior sensation Ani Mijacika, the #2 singles player in the nation according to the ITA preseason rankings. She is one of the program’s most decorated players, garnering All-America honors in singles and doubles in 2008 in addition to being named all-conference and an ITA All-Star. The native of Makarska, Croatia lost just twice during the 2007 fall season and finished at 30-8 overall.

Seniors Alexandra Luc and Federica van Adrichem also return for Head Coach Nancy Harris. Van Adrichem is listed 108th in the preseason singles poll and finished with a 13-14 record for the 2007-08 season. Luc won 18 singles matches and 23 doubles contests a year ago.

Rounding out the junior class is Ina Hadziselimovic, who recorded a 22-10 mark as a sophomore. Second-year player Laurianne Henry is not expected to play this weekend due to an injury, but a pair of rookies will see their first collegiate action. Heralded recruit Keri Wong, who hails from Jackson, MS, was a top-10 ranked American junior player, while Josipa Bek of Osijek, Croatia also brings an impressive junior resume to the Tiger program.