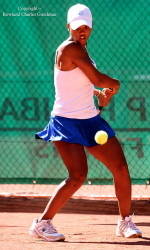 The Clemson women’s tennis head coach Nancy Harris has announced the signing of Tristen Dewar to the 2012 class. Dewar was ranked by tennisrecruiting.net as a top-ten player nationally, and in its list of 25 “blue-chip” American prospects. She attended high school at IMG Academy in Bradenton, FL.

Dewar has trained at the prestigious IMG Bollettieri Tennis Academy for eight years, and reached a career-best ITF ranking of 123rd in the world. She has extensive experience with tournament tennis in both singles and doubles, and played in the quialifying for the WTA Rogers Cup. She played in the U.S. Open juniors qualifying, and was a semifinalist at the Orange Bowl U18 in doubles.

She has played with current Tiger Yana Koroleva, who is sitting out the 2012 season, in doubles for a few tournaments.

Dewar joins Jessy Rompies (Jakarta, Indonesia), and Yui Lynn Miao (Taichung City, Taiwan) as the fourth member of the 2012 signing class, which also includes Romy Kölzer, who is with the team already.