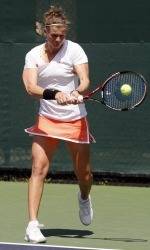 Clemson holds a 2-1 all-time mark against the Bears, as the two tangled in 2003, 2004, and 2005 during the regular season. Live scoring will be available at ClemsonTigers.com, and video of the match’s one-through-three positions will be available on TigerCast after the match and will be archived. Admission is free to the event.

Clemson is led by Josipa Bek, who checks in at No. 10 in the nation. She and Keri Wong are ranked No. 1 in the nation in doubles as well. Bek has won seven straight matches overall, and is 14-6 against ranked opponents in 2010-11.

Clemson is coming off a sweep of matches against Boston College and Maryland during the weekend.

The Bears will be the sixth team in the current ITA top ten that Clemson has played this season, with two more coming this weekend. Clemson’s next three opponents have a combined 50-8 (.862) record. The Tigers currently sit in fourth place in the conference, in position for a first round by in the The ACC currently has six teams in the top 18 nationally and nine among the top 32. ACC Tournament, but four of their last five matches are against teams in the top-20 nationally.