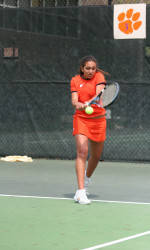 CLEMSON, SC – Following seven straight road matches, the Clemson women’s tennis team will finally return this weekend to the familiar setting of the Hoke Sloan Tennis Center. The Tigers will play host to Wake Forest at 11:00 am on Saturday in a match designated as a Solid Orange event. They will then take on NC State on Sunday at 1:00 pm.

Clemson enters the weekend with a 6-9 overall record and a 2-3 mark against ACC opponents. The Deacs are currently atop the conference standings with a 4-0 record and are 8-5 on the year, while the Wolfpack owns a 10-5 verall ledger and is 3-2 in the ACC.

Saturday’s match against Wake Forest will be broadcast on ACCSelect.com.

Tiger senior Carol Salge has won her last four matches while the reigning ACC Player-of-the-Week Ani Mijacika improved to 21-5 with a pair of wins last weekend. The two have partnered in doubles play nine times this dual season with a 7-2 record. Most recently, they posted wins over the nation’s #3- and #10-ranked teams and now have six against ranked opponents.

Clemson vs. Wake Forest, The Series With four straight wins over the Deacs, Clemson has taken a 22-17 lead in the series score. The Tigers swept Wake Forest last year in Winston-Salem, NC and won by a narrow 4-3 margin at the Hoke Sloan Tennis Center during the 2006 season.

Clemson vs. NC State, The Series The Tigers have dominated the series over NC State, falling just four times in history to the Wolfpack. Clemson’s current streak is six straight, which includes a 5-2 victory in 2007, to bring its total win count to 33.