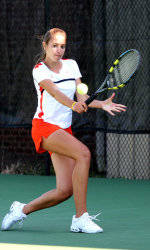 CLEMSON, SC – The Clemson women’s tennis team was ranked #6 in the Fila/ITA Tennis poll released on Tuesday, Apr. 17. Three Tigers were also listed in the singles poll while three Clemson doubles teams warranted rankings as well. With a 10-1 ACC record, the Tigers claimed a share of the ACC regular season title and earned the number-one seed for the upcoming ACC Championships. They boast a 19-3 overall mark, which includes seven wins over teams currently ranked in the top 25.

Clemson has now been ranked in the top 10 for seven straight weeks and has been listed among the top 25 for 20 consecutive polls.

Freshman Ani Mijacika who completed a perfect conference season at 11-0 and bettered her overall record to 24-5 last weekend, earned the #27 ranking in this week’s poll. Fellow rookie Estefania Balda was then listed 81st with a 14-6 record in the spring, and junior Carol Salge ranked 88th.

In the doubles poll, Mijacika teamed with Federica van Adrichem to earn the #12 spot and was listed 18th with Salge. Mijacika and van Adrichem have compiled a 13-4 record in dual matches, while the Makarska, Croatia native owns an 8-3 overall slate with Salge. A pair of freshmen, Balda and Ina Hadziselimovic, were then ranked 54th in the latest poll.

The Tigers will begin competition at the 2007 ACC Championships on Friday after receiving a first-round bye. They will face the winner of Thursday’s match between NC State and Virginia.