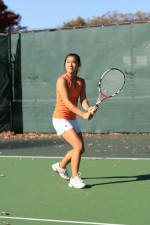 CLEMSON, SC – Clemson women’s tennis rookie Hoke Sloan Tennis Center on a sunny Sunday afternoon. The win was Clemson’s 10th straight over the Cavaliers and improved the Tigers to 31-4 all-time against Virginia. It also marked Clemson’s 12th win of the 2009 season against five losses, while bettering the Tigers to 4-1 in conference play.

Virginia dropped its second straight league match and now sits at 10-4 on the year and 3-2 in ACC action.

The Tigers rebounded from just the third loss in doubles play on Saturday to sweep the pairs matches on Sunday. At flight three, Estefania Balda and Alexandra Luc erased an early deficit to post an 8-4 victory over Claire Bartlett and Maggie Yahner and score the first victory for Clemson. Ina Hadziselimovic won by the same margin at the second position against the Virginia tandem of Amanda Rales and Neela Vaez to clinch the doubles point for the Tigers.

At the top spot, eighth-ranked Ani Mijacika and Keri Wong mounted a comeback to defeat Emily Fraser and Lindsey Hardenbergh. The Cavalier duo held a 7-4 lead in the match, but the Tiger players rallied to hold on Wong’s serve, broke Virginia’s service and then held again on Mijacika’s service to tie the match at seven apiece. The teams then played a tie-break to decide the match, in which the Clemson tandem won seven straight points for the win and a 7-2 in dual matches.

Bek put the Tigers on top, 2-0, with an easy victory over Lindsey Hardenbergh at flight two singles. The rookie from Osijek, Croatia downed the Cavalier player 6-0 in the first set and then dropped just one game in the second for her 24th win of the year.

Stevens then scored Virginia’s lone point of the afternoon as she defeated Balda at flight three (6-1, 6-4).

Mijacika finished third with a straight set victory over Fraser at flight one. The Clemson junior and #1-ranked player in the nation won both sets by a 6-2 margin to improve to 24-5 overall with a 12-2 record in dual matches. Wong followed with the clincher at flight five as she posted a 6-1, 6-4 victory over Bartlett, her sixth consecutive singles win.

Luc gave the Tiger a 5-1 advantage, winning 6-3, 6-1 over Karoline Steiro at the sixth position and Hadziselimovic wrapped up the match with a 6-3, 6-2 victory against Rales at flight four.