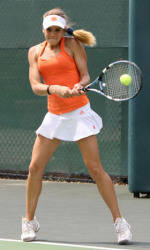 Women’s Tennis Opens Season With a Pair of Weekend Matches

CLEMSON, SC – The 14th-ranked Clemson women’s tennis team will open its 2010 campaign on Saturday as the Tigers take on the 68th-ranked College of Charleston. The match is scheduled to begin with doubles play at 11:00 am at the Clemson Indoor Tennis Center, with singles matches to follow. The Tigers will then turn around and play #43 VCU on Sunday at noon in the Indoor Tennis Center.

Clemson is coming off of a strong fall and a 2009 season in which the team reached the NCAA Sweet 16 for the fifth time in the last six seasons. The Tigers return three All-Americans from the group, who finished the season ranked #11 in the final poll.

The Tigers are led by sophomore Josipa Bek, who enters the 2010 season ranked ninth in the ITA Tennis Singles poll. The two-time All-American was 10-4 during the fall and came away with the Carolina Region Singles Championship. She posted seven wins against ranked opponents on her way through the tournaments.

Clemson then has an array of options in the lineup, with five players who have all been ranked at some point in their careers. Sophomore Ina Hadziselimovic is ranked #113 entering the spring season, and has won 67 singles matches in her career, including 22 and 23 in each of the past two seasons.

She pairs with Josipa Bek to form the fourth-ranked doubles tandem nationally in the ITA Doubles poll. The two advanced to the quarterfinals of the NCAA Doubles Championship, earning All-America honors in the process.

Freshman Nelly Ciolkowski is the second-highest ranked player currently, pulling a #61 mark after a stellar fall season, in which she compiled a 7-1 overall mark, including wins over three ranked opponents in her first semester of competition.

Junior Laurianne Henry and Senior Estefania Balda have been key contributors for the past three seasons, and are both healthy coming into 2010.