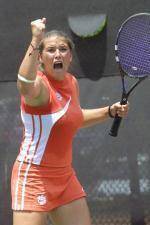 CLEMSON, SC – The 14th-ranked Clemson women’s tennis team will hold the final Solid Orange…One Clemson event of academic year on Saturday, Apr. 16. They will face #13 North Carolina at 10:30 am. The Tigers are 15-7 on the year and 5-2 in conference action. Fans are encouraged to wear orange to show their support of Clemson Athletics.

Clemson leads the series against the Tar Heels by a 29-12 margin, including a 10-5 home court advantage. The Tigers defeated North Carolina twice last season. In the regular season contest, Clemson, then-ranked #16, upset the #9 Tar Heels in Chapel Hill, 6-1. The ninth-ranked Tigers then bettered #14 North Carolina for a second time in the ACC Tournament, 4-1. Clemson also won the 2003 meeting played in Clemson by a score of 4-3.

The Tigers’ last regular season contest will be on Sunday, Apr. 17 versus #16 Duke at 2:30 pm. The team will honor its four seniors, Julie Coin, Alix Lacelarie, Richele LeSaldo and Ioana Paun, prior to the match.

The Blue Devils hold a 22-14 advantage in the series score, but Clemson won both matches last season. The #16 Tigers knocked off #4 Duke, 5-2, during the regular season in Durham, NC and again upset the Blue Devils, then-ranked #5, to claim the ACC title by a score of 5-2. Duke won the last meeting in Clemson during the 2003 season, 4-3, to better their record over the Tigers to 8-6 in matches played at the Hoke Sloan Tennis Center.