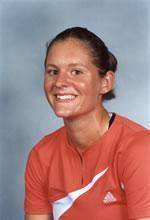 GREENSBORO, NC – Three Clemson women’s tennis players were named to the 2005 All-ACC team, as announced by the conference on Wednesday. Maria Brito, Julie Coin and Romy Farah earned the honor for the Tigers. It is the eighth time in school history that Clemson has had three or more student-athletes named to the all-conference women’s tennis team.

The Tigers, along with Georgia Tech, Miami and North Carolina, placed a league-high three players on this year’s team. Wake Forest placed two on the team, while Duke, Florida State, Maryland and Virginia Tech rounded out the All-Conference team with one selection apiece.

Coin, a senior from Amiens, France, is currently ranked #2 in the nation, according to the ITA singles poll. At flight one singles, she boasts a 31-3 overall record and a 22-1 mark in dual action, including a 9-1 record against ACC opponents. She has won 26 matches in doubles competition during the fall and spring seasons and has gone 9-1 in ACC doubles matches. Coin was also named to the All-ACC team for the 2003 and 2004 seasons.

In her first year as a Tiger, Farah has compiled a 22-11 overall record, including a 15-9 mark in the dual season. The native of Cali, Colombia went 9-1 in both ACC singles and doubles matches and won 21 doubles contests overall. The freshman is ranked #71 in the ITA singles poll released on Apr. 19.

Brito earned her second straight All-ACC selection after posting a 17-15 mark overall and a 5-5 record in ACC competition. The sophomore from Mexico City, Mexico has won seven doubles matches over ACC opponents against three losses.

The Tigers begin play in the 2005 ACC Tournament on Friday, Apr. 22 at 6:00 pm at the Cary Tennis Center in Cary, NC. Clemson is the third seed in the tournament and will face the winner of sixth-seeded Wake Forest and #11 seed Virginia Tech.