Dates and opponents subject to change.

Clemson will begin conference play on the road on February 24 at Louisville, followed by a trip to Notre Dame on February 26. The Tigers will take on Wake Forest and NC State on the road the following weekend before returning home for a run of four-consecutive ACC matches against Duke, North Carolina, Syracuse and Boston College.

Clemson will take on Virginia Tech and Virginia on the road before rounding out the ACC slate at home against Georgia Tech, Miami and Florida State. The 2023 ACC Championship Tournament will take place from April 19-23 in Cary, N.C. 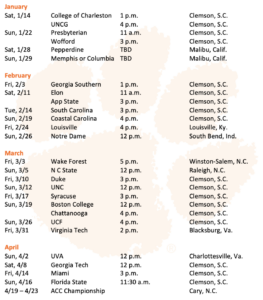