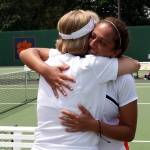 CLEMSON, SC – Clemson junior Carol Salge clinched the Tigers’ victory for the second straight day, as the Clemson women’s tennis team captured the 2007 regional crown with a 4-1 win over Virginia on Saturday afternoon at the Hoke Sloan Tennis Center. The Tigers improved to 22-4 on the year, while the Cavaliers’ season concluded with a 12-12 overall record.

Clemson now advances to the NCAA Round of 16, which will begin on Friday, May 18 in Athens, GA, and will make their third appearance at the NCAA Championships in the last four years.

“Virginia is a tough team, but I felt like the Tigers were excited and ready to play,” Clemson Head Coach Nancy Harris said. “I am really proud of how today went. We stayed focus on their weaknesses and kept calm. “

The Tigers won their 10th straight doubles point and the 22nd of the 2007 season as they captured victories at the flight two and three positions. Estefania Balda and Ina Hadziselimovic, Clemson’s 55th-ranked tandem, trailed early in their match, 3-0, to Kristen McVitty and Jennifer Stevens before scoring eight unanswered points to post the Tigers’ first win of the afternoon at the number two spot. Salge and Maria Brito then clinched the point for Clemson just moments later with their 10th straight doubles victory. The Tiger team defeated Amanda Rales and Brintney Larson at flight two, 8-5.

The top doubles match-up between Clemson’s Ani Mijacika and Federica van Adrichem and Virginia’s Caroline Hammond and Lara Alexander was then called with the Tiger team leading, 5-3.

Mijacika then put Clemson on top 2-0 with her straight-set victory over Stevens at flight one. She claimed the first set, 6-2, and won the final three games in the second frame for the 6-3 decision. The win was her 25th of the year and 20th of the dual season.

The Cavaliers narrowed the gap to 2-1 as Lindsey Pereira won over van Adrichem, 6-3, 6-3, at the flight five position. Balda scored the Tigers’ third point of the afternoon with her win at flight three. She defeated Larson in straight sets, 6-1, 6-2, to post her second victory in as many days and improve to 16-7 in the spring season.

Salge then posted a 6-4, 6-1 victory over McVitty to seal the victory for Clemson, clinching her team’s win for the second straight day. She scored the match point with an overhead winner, breaking McVitty’s serve for the straight-set victory.