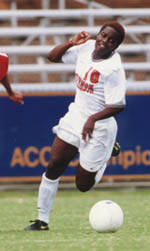 CLEMSON, S.C.–Nancy Augustyniak scored a goal and assisted on the other in leading fourth-ranked Clemson to a 2-1 upset win over number-one ranked North Carolina in an Atlantic Coast Conference women’s soccer match at Clemson, SC Wednesday (September 13) night.

North Carolina had won 37 consecutive Atlantic Coast Conference matches dating back to a 3-2 loss to Duke on October 19, 1994, the first season Clemson fielded a women’s soccer team. Clemson and Duke are the only teams in history to defeat North Carolina in ACC play. North Carolina scored first as Jena Kluegel sent the ball in on a corner kick. Maggie Tomecka flicked the ball to Anne Remy who scored from six yards out with 33:31 gone in the match.

Nancy Augustyniak scored on a penalty kick at the 61:12 mark. Deliah Arrington was brought down in the box by North Carolina goal keeper, Kristin DePlanchett.

Arrington scored the winning goal at the 74:31 mark. Augustyniak sent a ball that Lea Shreve flicked with her head to Arrington who sent a 25 yard shot on the ground to the lower right corner of the net. “The key to this victory was guts,” said Clemson Head Coach Ray Leone. “Our team showed a commitment for 90 minutes. I am so proud of them.

“This win is for my wife Tracey who started this program in 1994. It killed her that she could not be here. She is in Sydney for the Olympics. She called the team before the game and wished them luck. I am especially happy for this senior class. (On the winning goal.) It was a quick shot and it surprised their keeper. It seemed liked it rolled for ever.”

The baseball program has nine wins over the #1 ranked team. The men’s soccer program is second with five #1 wins.