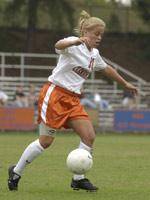 SAN DIEGO, CA-Clemson and San Diego played to a 1-1 overtime tie in a women’s intercollegiate soccer match at San Diego, CA Sunday. Clemson is now 5-2-1 on the year while San Diego in 4-1-2 this season.

The Lady Tigers scored early at the 5:13 mark as Allison Graham scored on a free kick from the right side. San Diego tied the score with under two minutes left in regulation (88:39) as Brenna Mullen scored on a bending shot from the left side.

The Lady Tigers’ goalkeeper, Lauren Whitt finished with five saves, while San Diego’s Libby Bassett had three saves. Clemson will play host to Coastal Carolina on Sunday, September 28, at 6:00 p.m. in the Lady Tigers’ next action.

“Despite that we gave up the tying goal late in regulation, I am pleased with the character we showed in the overtime period,” said Clemson Head Coach Todd Bramble. “We could have easily gave up in the overtime period, but we played hard and had several chances to win including two shots that hit the cross bar. Although we tied today, I am happy with the effort we showed in these circumstances. We look forward to getting back to Clemson and playing two home matches that are coming up on the schedule.”