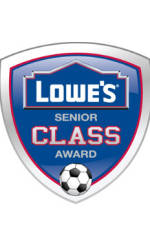 Bolt leads the Tigers in scoring with eight goals on the 2008 season and now has 18 goals for her career. She is a two-time Second Team All-ACC honoree and is also a two-year member of the All-ACC Academic Women’s Soccer Team.

Johnson has started all 73 games of her career thus far and has been a mainstay on the Tiger defense during those four years. She was named to the ESPN The Magazine Academic All-District 3 First Team in 2007 and is also a two-time member of the All-ACC Academic Team.

About the Award The award, given annually to senior student-athletes across nine NCAA Division I sports, has become one of the most prestigious honors in college athletics and is sponsored by Lowe’s, an Official Corporate Partner of the NCAA.

The 2008 candidates on the women’s side represent 26 different NCAA colleges and universities and 19 athletics conferences across the country. Five schools – Clemson, Notre Dame, BYU, Duke, and USC – boast two candidates each within this elite group of seniors. The Atlantic Coast Conference leads the pack with five candidates while the Big East Conference is close behind with three. The men’s list follows a similar pattern with 28 schools representing 17 conferences. The University of South Florida holds the multiple-athlete honor on the men’s side with two candidates. The Big East conference dominates with five total candidates followed by the Big Ten, Pac-10, and Ivy League, which are tied with three each.

From the list of 30 candidates, a national media committee will select 10 finalists for the 2008 Lowe’s Senior CLASS Award in both divisions in October. Those 10 names from each division will then be placed on the official ballot for a nationwide vote beginning October 9 and concluding November 19. Fan balloting will be coupled with votes from coaches and media to determine the recipient of the award. Winners will be announced during the 2008 NCAA Division I Women’s Soccer Championships in Cary, North Carolina, scheduled for December 5-7, and during the 2008 NCAA Division I Men’s Soccer Championships in Frisco, Texas, scheduled for December 12-14.

“The caliber of individuals in this year’s senior class of soccer players made narrowing the field to 30 for each category very difficult,” said Bob Gfeller, Lowe’s senior vice president of marketing and advertising. “We are ecstatic to see how many talented senior student-athletes are electing to use their skills not only on the playing field, but also in the classroom and in the community.”