CLEMSON, S.C. – The Clemson women’s soccer team will square-off with seven NCAA Tournament teams from a season ago, as Head Coach Eddie Radwanski announced the 2019 schedule on Thursday. Five of Clemson’s opponents in 2019 finished last season ranked in the United Soccer Coaches Top 25.

“We’re very excited for the 2019 season,” said Radwanski. “We have some exciting challenges in the upcoming 2019 schedule. Playing two PAC-12 teams (Utah & Oregon) with the season opener vs. Utah is a great way to kick off the season. We have a tough road trip going to Nebraska and Creighton, but we feel these games along with Coastal Carolina, Georgia and South Carolina will help prepare us for conference play in the ACC. The Atlantic Coast Conference will be as tough as ever this year and our Clemson fans will get to see the best teams in the country at Historic Riggs Field. Defending national champion Florida State highlights many of the great ACC games we have at home. Our team had a very good spring and had tremendous growth in many areas, so we are excited and can’t wait to get going!”

The Tigers will play a pair of exhibition matches in a five-day span ahead of the 2019 season opener. Clemson will travel to Greenville, S.C. to take on Furman on August 13 before heading up to Lynchburg, Va. to face Liberty on August 17 for the final tune-up before the regular season begins.

Clemson will open the regular season at Historic Riggs Field for the first since 2014, when they face off against Utah on Aug. 22. This will be the first meeting between the two programs. The Tigers are 23-1-1 in season-opening matches, dating back to the program’s inaugural season in 1994.

Clemson will open up ACC play against Notre Dame on Sept. 20. This will be the third straight year that the Tigers have opened ACC play on its home pitch. Since Radwanski has taken over the program in 2010, the Tigers are 3-6 in ACC openers and are 1-1 against the Irish in the openers.

A Trio of Tough Opponents

The Tigers kick off a tough three-match stretch in October when they face three consecutive NCAA Tournament teams from a season ago. Clemson and North Carolina square-off on Oct. 5 in the first road contest after the six-match homestand. On Oct. 10 the Tigers will travel to Kentucky to face the Louisville Cardinals before they head to Durham, N.C. to take on the Duke Blue Devils.

Closing Out the ACC Slate

Clemson will host the Syracuse Orange on Oct. 19, marking the first time the two teams have met at Historic Riggs since the 2016 season. On Oct. 24 the Tigers head south to take on the Hurricanes. The Tigers have not lost a match to Miami since 2013.

The final regular season home match for Clemson is set for Oct. 27 against Pitt before Radwanski and his team ship up to Boston to close out the regular season against the Eagles on Oct. 31. 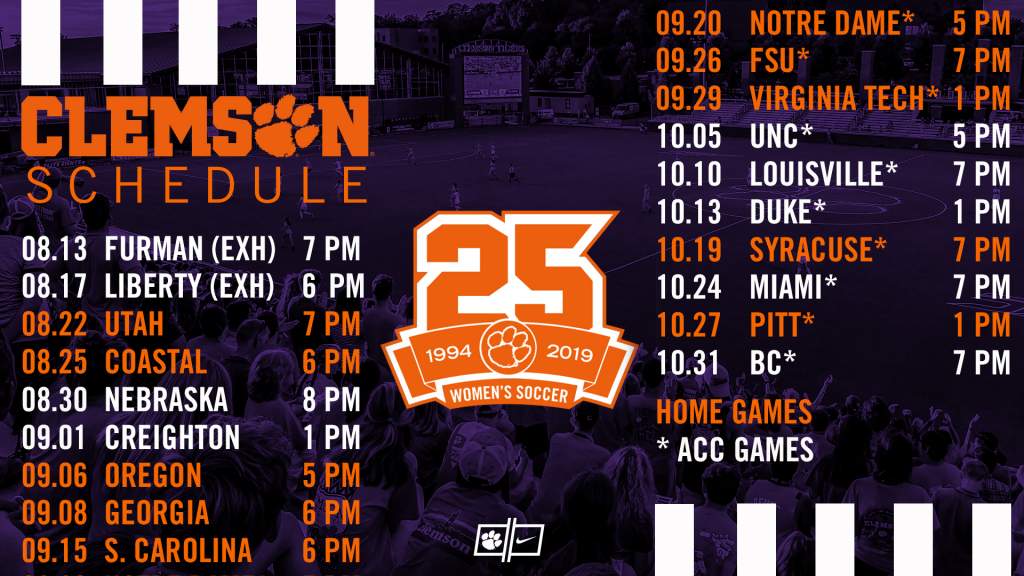